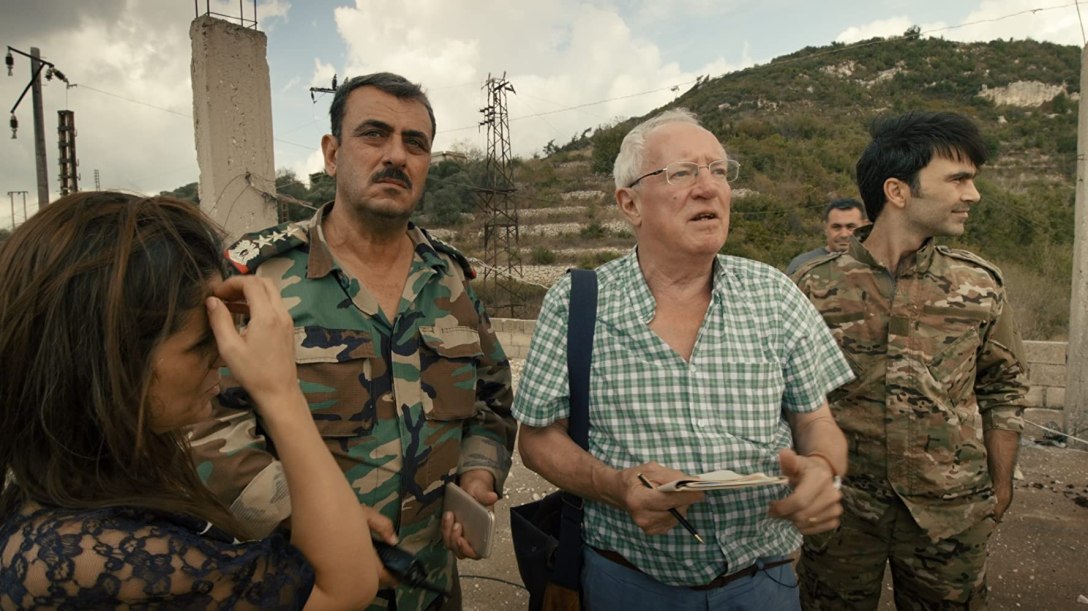 There are not many western journalists who can claim to have interviewed Osama Bin Laden; Robert Fisk interviewed him three times. I can still vividly recall reading the front-page report in the Independent in the early nineties. That this merits just a few minutes in this feature-length documentary indicates the breadth of this journalist’s exceptional career.

For viewers like me, who have admired his writing and integrity for decades, this remarkable film is a fascinating portrait not least because it’s an opportunity to see the man on screen.

Of course, it’s sadly inevitable that a journalist covering the Middle East will mostly be covering conflict and its aftereffects. Fisk has never shied away from either. While other journalists might follow the politicians, be officially embedded with the nearest western army or merely watching the wire refuged in the nearest western hotel. Fisk is more commonly found taking his own path, on the ground seeing the effects of massacres first-hand, interviewing victims and giving voice to their tales. His writing a mix of humanity and outright indignation.

We first follow him in Syria, visiting the battlefront in Idlib Province, the Syrian army firing occasional shells high overhead as the distant unseen enemy seem curiously silent. This is shortly after wandering through an eerily desolate, ruined and abandoned Homs (the city where fellow journalist Marie Colvin was killed, as depicted in 2018’s A Private War).

Later we see an example of his investigative journalism, ever-present notebook in hand, following an arms trail linking a logbook he found in an abandoned basement in eastern Aleppo, previously occupied by al-Qaeda, to the munitions factory in Bosnia. We watch him trying to piece together the gaps to prove his suspicion that the arms were provided via Saudi Arabia. It’s fascinating stuff.

The film intersperses this with highlights from his formative years and his career. His father, a strong influence, who smuggled a camera into the First World War trenches. His early years as a journalist covering Northern Ireland challenging the official line when he learned not to “believe the army had a monopoly on truth”. His resignation from The Times for Murdoch’s political interference. All succinctly told, and each anecdote inserted to make a point rather than just serve as a biographical filler.

We also see him revisit places or people from his journalistic past. It’s an effective means to make these career highlights more immediate although there’s plenty of archive footage as well. This approach doesn’t feel contrived because for Fisk the Middle East isn’t just a place to visit for a while and then leave, it’s where he’s made his home, living in Beirut for over four decades, investigating the region as an ongoing tale where past events have current legacies.

Most affectingly, we visit Sabra and Chatila, the Palestinian refugee camp in the outskirts of Beirut. In 1982 this was the site of a horrendous massacre of innocents by Christian Phalangist militia during the Lebanese civil war, while the occupying Israeli army deliberately did nothing. Fisk was one of the first journalists on the scene. The endless, piled-up bodies of civilian men, women and children left a lasting impression – Fisk writes about it vividly in his excellent book ‘Pity The Nation’ – and the archive footage and his recollections are still devastating. As he walks the alleyways where the bodies were once strewn, he interviews an 18-year-old Palestinian woman who wasn’t born until seven years after the massacre, whose father had recently been killed but who still has hope for her tragic community’s future.

This is an admiring documentary and director Yung Chang lets Fisk tell his own story. His political opinions and tenacity to report uncomfortable truths have earned him enemies and even death threats and I expect his detractors might find it frustratingly one-sided. Although it does briefly address some accusations against him, this mostly involves Fisk airing his well-rehearsed insistent retorts rather than giving voice to his critics. He has never been interested in finding ‘balance’ in every story and this flattering film doesn’t challenge this position. He explains instead that “you develop the idea that the old ideas of journalism that you’ve got to be neutral and take nobody’s side, is rubbish. I think as a journalist you’ve got to be neutral and unbiased on the side of those who suffer”.

Fisk has always been stubbornly independent. This is the man who reported that he couldn’t find any strong evidence of a chemical attack on Douma (you might recall Hilary Benn using chemical warfare as a justification for bombing Syria) or tracing artillery fragments to NATO planes at the scene of a massacre of Kosovan refugees, an incident of ‘friendly fire’ that was previously officially denied. The overwhelming impression from this film is a man who will always challenge authority to get at the truth.

He also comes across as someone who lives his work. His flat is filled with shelves upon shelves of his neatly organised notebooks and documents. He wryly notes that “the world wide web does not contain all the materials that I’ve got on paper”. He is fascinated by the region, always wondering what’s going to happen next. And in a remarkable moment he confesses that he rarely has nightmares despite the horrors around him; there’s no cliched, damaged adrenaline-junkie here.

This is about as close as we get to any hidden insight in the man. For a writer who is so good at drawing out the personal stories from everyday individuals in extraordinary situations, his private life is remarkably unremarkable.

Instead, his character is found in his journalism. In his perseverance and his fascination with the region, his insistence on seeing things first-hand, on telling people’s stories and witnessing conflicts. And in exposing inconvenient truths. We see all of this in this excellent documentary.

This Is Not A Movie is available on Curzon Home Cinema. As well as the collections of his journalism for The Independent, I’d particularly recommend his two books ‘Pity The Nation‘ about the Lebanon civil war and ‘The Great War for Civilisation‘.