Michael Haneke makes uncomfortable films.  The guilt-driven thriller Cache, the traumatic Funny Games, the coldly cruel The Piano Teacher and the quietly chilling The White Ribbon are all intelligent, provocative masterpieces.  Happy End – his latest –  is surprisingly light in tone and even funny in places.  A departure of sorts, it’s certainly less extreme than we’ve come to expect, although its dark themes linger.

Once again, this is a detached critique of middle class repression and hidden darkness.

The film depicts the bourgeois Laurents, wealthy from the success of the family construction firm that was built by the aging Georges (Jean-Louis Trintignant) and is now run by His daughter Anne (Isabelle Huppert) with her brother Thomas (Mathieu Kassovitz).   The family has a comfortable life. 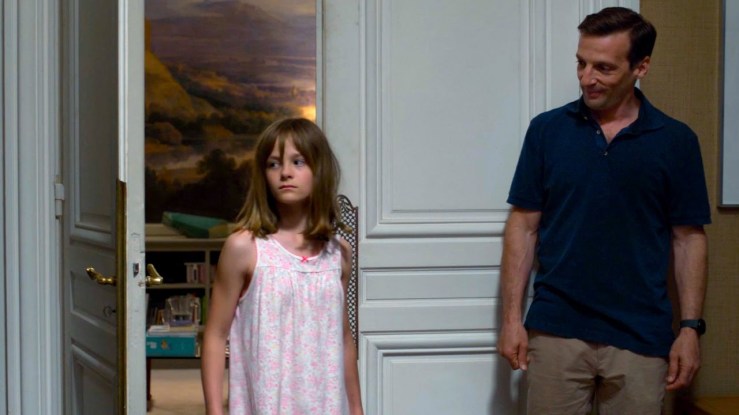 We initially see the family from the perspective of Ève (Fantine Harduin), Thomas’s twelve-year-old daughter by a previous marriage.  Ève is quiet, anxious and unhappy. During the opening credits, we watch footage taken using her smartphone: she calmly feeds her pet hamster her mother’s anti-depressants just to see what happens.  Soon after, Ève moves into the Laurent family home when her mother is hospitalised after an overdose.  Haneke gives the viewer time to ponder whether Ève was mimicking  her mother’s suicide attempt with the casually murderous hamster experiment, or if Ève had a more sinister involvement: it’s never queried or explained, but the suspicion lingers.

The narrative opens out to observe the wider family, their relationships, hypocrisies, pettiness, indolence, anger and resentments.

Anne’s wayward son Pierre (Franz Rogowski) is a negligent and alcoholic site supervisor; a construction accident on his watch leads to injury claims that cause difficulties in the family.   There are tensions: he expects to inherit control of the construction company, but his mother wants to limit his responsibility.

Ève builds up a trusting relationship with grandfather Georges, who confides that he wants to kill himself rather than face a future of numbing frailty.  He tells her a fatal secret, a confession that echoes the events in Haneke’s earlier film Amour where Trintignant also played a character named Georges.  This is a clear hint of a Haneke universe emerging.  Hupert also plays a character called ‘Anne Laurent’ with husband George and daughter Eve in Haneke’s post-apocalypic Time of the Wolf.

As usual with Haneke, there are violent undercurrents but this is never exploitative.  The moments of violence – the overdose, the construction site landfall, a beating and a slight and shocking action near the film’s conclusion – are all depicted off-camera or at a distance, the effect is to separate and numb the viewer.

Haneke has assembled a terrific ensemble case, perhaps his starriest.  Reunited with the exceptional Huppert, and with Kassovitz and Trintignant, he adds Toby Jones and an incredible performance by newcomer Harduin.  Their characters feel fully defined with their frailties and secrets.  Every scene is quietly fascinating.

The presence of foreigners is constant and seems uncomfortable for the family.  The live-in servants, a Moroccan couple, are treated dismissively and with condescension.  In the background is the quiet presence of Calais migrants.  Near the end, the attention-seeking Pierre attempts to manufacture an uncomfortable scene by inviting a cluster of migrant workers to a family gathering, as a provocation to their bourgeois bubble.  That scene comments on the family’s insularity and Pierre’s character.

Earlier, there’s an inexplicably tense yet benign sequence where Georges goes far a walk, the camera observing.  In his mild way he starts talking with a group of male migrants, but he seems to want to provoke them, a potentially self-destructive act.  There is no attack, no violence but the audience feels a sense of tension – the scene is a blank canvas for the audience to project their own prejudices, although this tension is subtly encouraged by the distance of the camera signalling the possibility of violence.  We’ve learned to be wary of such sequences in a Haneke film.

Despite all this, the tone is disconcertingly light.  There are many instances of humour to be drawn from gently parodying the main characters, and even if much of this humour is black and nervous it diffuses the tension.  It’s the first Haneke film that I’ve seen which didn’t make me feel emotionally pummeled when exiting the cinema.

The film refuses to present a single strong narrative or perspective and consequently it seems a little aimless, although always fascinating.  Haneke’s film have a particular style, and in Happy End it almost feels that there is a distinct Haneke genre.  Perhaps because of this and because it has a lighter tone than normal, it feels less significant than many of his previous films.