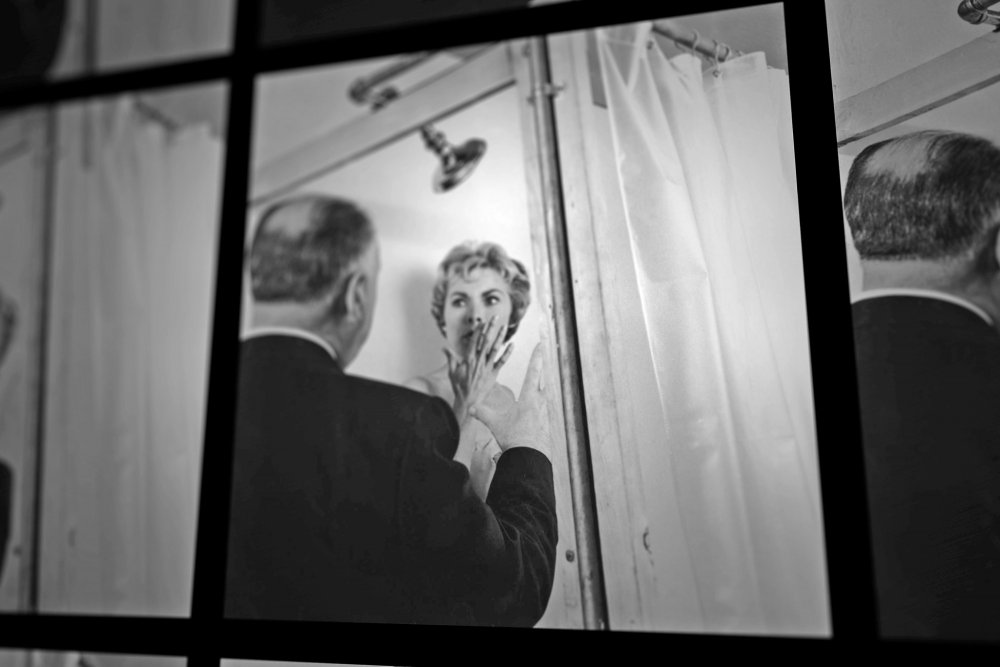 The shower scene in Alfred Hitchcock’s 1960 shocker Psycho is famous for its technical audacity, but does this two-minute sequence merit an entire 91 minute documentary?  This fascinating and insightful film left the audience wanting even more.

It seems an unpromising subject, at least on paper: a whole film dedicated to such a short sequence.  It helps that the sequence is both famous and technically complex (the title comes from the 78 camera setups and 52 cuts it contains), so there’s a lot to consider.  It would be easy for this documentary to be dry and academic.

For filmmaker Alexandre O. Phillippe the shower scene has become an obsession.  But it’s an obsession shared with a large number of famous and informed admirers.  Guillermo del Toro admires the direction, Peter Bogdanovich recalls the reaction at the premiere, Elijah Wood is a fanboy, Daniel Elfman loves the soundtrack, and Walter Murch dissects the editing.  Phillippe’s film interviews these people and many more, and he has compiled their broad perspectives into a well crafted, comprehensive and enthusiastic celebration.

For those who haven’t seen Psycho, the scene in question shows the shocking murder of Marion Crane, played by Janet Leigh.  Hitchcock played a cruel joke on the audience, setting up Leigh as the main character before twenty minutes later killing her off in such an unexpected and brutal manner.  She is naked and vulnerable in the shower.  Suddenly the killer appears from behind the curtain and stabs her to death, the blood famously washed down the plug hole.  It’s still powerful today.

The scene is infamous for suggesting a lot more than it actually shows.  We don’t really see the huge knife slashing into bare flesh, but we think we do.  All of this is well known film history; what 78/52 explores is how Hitchcock achieved this.

The documentary has a simple three-part structure.  The initial twenty minutes or so talks about Psycho and the shower scene in the context of the time and Hitchcock’s career.  The middle part covers the sequence itself shot-by-shot [much like in Psycho, the audience has to wait a while before we first see the shower scene].  A brief coda examines its legacy.

We learn that it took seven exhaustingly full days of shooting to film the shower sequence, involving multiple camera angles and body doubles.

For such a short sequence, no matter how pivotal, such a lengthy and involved shoot was unprecedented. Hitchcock asked Saul Bass (famous for the title sequences of North by Northwest, Vertigo, and much more), to storyboard the sequence.  Every shot, every angle, every cut was meticulously planned.

Watching this documentary I was struck at how much innovation was crammed into such a short sequence; it truly is the Citizen Kane of movie murders.  I don’t want to spoil the documentary, but I’ll mention a few aspects that particularly impressed me.

The scene itself has a surprising amount of symmetry.  It starts and ends with an upward view of the shower head spraying water and with shots of water – and then blood – circling down a plughole.  The establishing shot is a slow pan over the motel room to the shower.  The last shot is similar: the final plughole shot dissolves into a rotating shot of Janet Leigh’s eye.  The slow-motion pull-back was extremely difficult to film and edit; it consists of a freeze frame that then morphs into moving footage.  The join is seamless.

The sequence uses jump-cuts for effect: although jump-cuts weren’t entirely new (Frankenstein and even The Birds use jump cuts), I don’t think they had been so effective and well-crafted before.

There’s a fascinating discussion on the sound design.  Bernard Hermann’s music, of course, but also the foley.  In particular, the sickening sound of knife penetrating flesh had to be just right, to reinforce the illusion that we think we see more than we do.  What we actually hear is the sound of a knife penetrating a beef sirloin, and also a specific Mexican variety of melon called a ‘casaba’ melon.

The closed shower curtain creates a sense of enclosure and safety, but of course that will soon be violated.  It was important that the shower curtain itself was translucent – not transparent or opaque – so the viewer could see the danger of the approaching killer, but not too clearly.   We are shown how Hitchcock (and Bass) framed the famous shot using negative space to draw the audience’s attention to killer’s slow approach before Janet Leight’s character is herself aware.  I find it masterful that Hitchcock was able to create suspense in an extremely fast-moving sequence; other film makers would simply rely on shock or gore.

[In an interesting aside, editor Walter Murch explained that a particular scene in The Conversation was designed to directly reference the shower scene, but in reverse.  Gene Hackman anticipates finding a body in the shower, behind a screen.  The scene was reversed in time sequence (shower then toilet shown), reverse perspective (we watch from outside the curtain, the translucency obscuring whats behind), and in detail (no body, no blood around the plughole).]

I also learned that the scene itself is subconsciously prefigured by references to showers (and mothers).  There are several seemingly inconsequential dialogue snippets that appear to be setting up the scene for the audience.  Also, it’s a well-known piece of movie trivia that Psycho was the first Hollywood film to show a flushing toilet; this broke a minor taboo and was deliberate: it signaled to the audience that this was going to be a novel and maybe a dangerous film.  Of course, the tension starts even earlier, long before the audience takes their seat, due to the exceptional marketing campaign that this documentary also describes.

Peter Bogdanovich remarked that the cinema was a safe place before Psycho and the shower scene changed everything.  That might be a slight exaggeration, but the popular American cinema in the fifties and before was essentially escapism.  Yes there were horror movies, most famously in the 1930s from Universal Studios, and sci-fi drive-in monster movies, and hard-boiled thriller and gangster flicks but these were still essentially escapism.  There had been nothing before that was quite so sordid and shocking as Psycho, the film was nasty and yet extremely well crafted.  The audience is repelled and shocked, but also thrilled by the violence and voyeurism.

The documentary concludes by exploring its legacy in subsequent films, most immediately in Italian films like Mario Bava’s The Girl Who Knew Too Much, and Dario Agento’s Suspiria, Tenebrae,  and The Bird with the Crystal Plumage.  It spawned the American slasher genre with films like John Carpenter’s Halloween.  And, of course, Gus van Sant’s shot-by-shot remake.

This is an incredibly engaging and fascinating documentary.  At the Q&A that followed the London Film Festival premiere, Phillippe asked for a show of hands for people who had never seen Psycho – I was amazed to see that there were a sizable minority.  It certainly made me want to see Psycho again and ideally on the big screen.  The excerpts looked amazing, almost contemporary.

The documentary’s premise is exceptionally geeky and the subject matter is inevitably only going to appeal to film enthusiasts.  That’s a shame, as it’s engaging, accessible and very entertaining.  At the Q&A, people were asking if there would be even more documentary out-takes in blu-ray, they (and I) clearly wanted more.

Phillippe said he hadn’t finished examining the shower sequence: he is currently writing a book and he intends to make a sister documentary.  While 78/52 interviews people intrinsically linked to the film industry, the follow-up film would explore the reactions from people in other creative arts: music, architecture, visual art and suchlike.  But as he’s wary of becoming ‘the shower scene man’, it might be a while before we see that film.  Instead, Phillippe has been commissioned to make shorts that dissect famous scenes for the Criterion Collection, and his next feature-length documentary will be an exploration of the famous chest-burster scene from Alien.