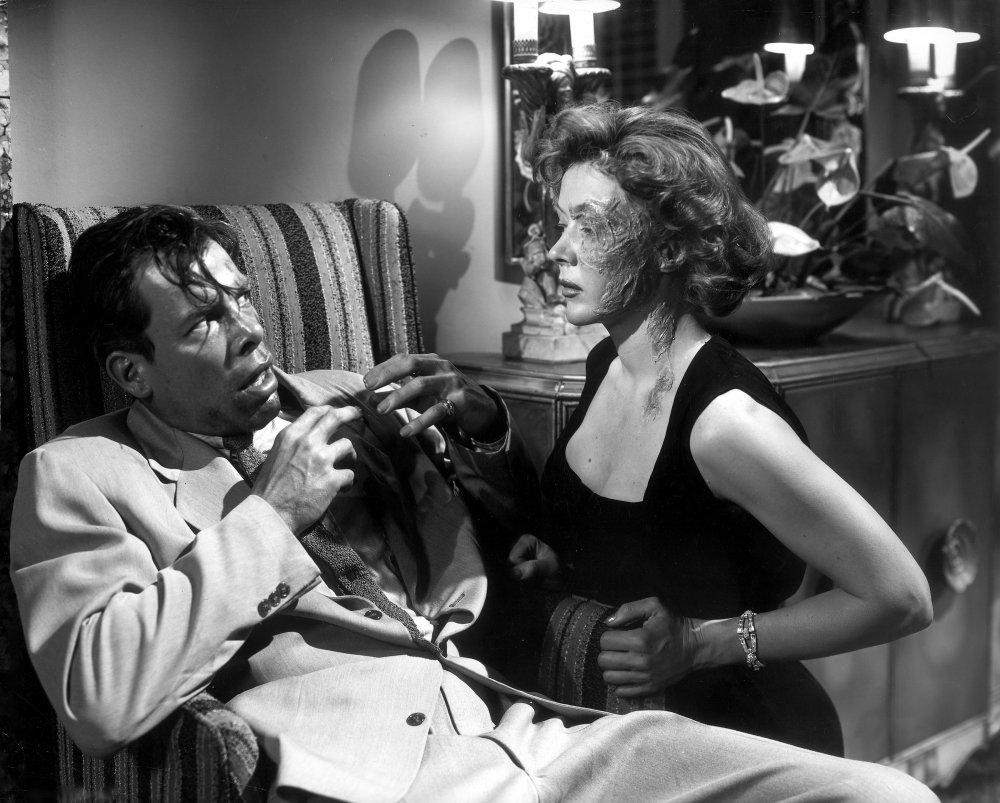 The Big Heat is a surprisingly gripping, violent and morally ambiguous movie, particularly given its age.  It was released in a superb restoration on blu-ray by Powerhouse in 2017 and was screened recently at the BFI as part of a Gloria Grahame season.

Dave Bannion (Glenn Ford), a homicide cop, takes on a crime organisation that controls the city by violence and corruption.  He is called to investigate the suicide of Tom Duncan, a fellow policeman.  Duncan’s wife (Jeanette Nolan) attributes the suicide recent ill health.  However, Bannion begins to look a little closer when Duncan’s mistress Lucy Chapman gets in contact to suggest that there might be something more to it.  His suspicions are heightened when his superior abruptly orders him to drop the case, implying that there is pressure from the police commissioner.  Chapman body is soon discovered; she’d been tortured and killed.  Bannion, his wife (Jocelyn Brando) and child are subjected to anonymous threats.

This all points to crime boss Mike Lagana (Alexander Scourby) and his syndicate that includes sadistic thug Vince Stone, played by Lee Marvin.  Stone’s girlfriend Debby (played wonderfully by Gloria Grahame) is a young, alcoholic party girl; she puts up with with Stone’s rough treatment in return for living the high life, however she has a rebellious streak.

It turns out that widower Katie Duncan is blackmailing Lagana and Stone, with incriminating information in her husband’s suicide note, and they don’t want police interference.  When Bannion’s wife is killed in a bombing meant for Bannion himself, he quits the police and sets out on his own, after revenge.  He’s befriended by Debby, who has her own grievances.   In their own separate ways, Bannion and Debby seek to avenge themselves.

Fritz Lang was a film director with two distinct successful careers: one in pre-war Germany, and the second in Hollywood.  It wasn’t money or fame that lured him to America.  As a Jew, he felt increasingly threatened by the changing public mood in early 1930s Germany.  His wife and creative partner Thea von Harbou found Nazi ideology increasingly appealing, and the two subsequently divorced.  And when Nazi propaganda minister Joseph Goebbels summoned him to say that his latest film was banned (The Testament of Dr Mabuse, in which he put Nazi slogans in the mouths of the villains), but nevertheless Lang could have the job of running the state film company, Lang decided to flee Germany and ended up in the US.

This meant that Lang, like fellow émigré director Billy Wilder, could look at America from the distance of an outsider’s perspective, but also from within.  The Big Heat is a taut thriller that looks head-on at violence and morality in American society.

The film contrasts domestic idyll and moral integrity against the ambiguities and cruelty of the real world.

Policeman Bannion lives a comfortable, contented life.  He has a good job and a loving family.  He adores his young daughter, and is clearly in love with his wife.  In other words, he has a lot to lose.

Lang’s portrayal of domesticity is warm, with the pram outside the door and bedtime stories on returning from work, but it doesn’t veer into the stereotypical, apple-pie, saccharine visions that you often see in films of this era.  It feels more real than that, more modern.  It’s contrasted with the domestic life of the crime boss Lagana, who we first meet when Bannion goes to his house, when his teenage daugher happens to be having a birthday party.  Lagana is affronted that Bannion brings the ‘real world’ to upset his household, but Lagana’s home life is dishonest, a facade because of Lagana’s lies and duplicity.  This is contrasted with Bannion’s domestic happiness, which is threatened and attacked by Lagana.

His relationship with his 27 year-old wife Katie is touching, and although her screentime is brief she is an important character.  Katie is a modern woman; we see her sharing a beer or a cigarette with her husband, and she’s both practical and sexual.  What’s more, she’s tough and level-headed, not sheltered.  She understands what’s at stake when Bannion refuses to turn a blind eye to corruption.  In a crucial scene, he tacitly seeks her approval to pursue the criminals.  She knows that this would put the whole family at serious risk. She gets it and she gives him her support anyway; there’s a determined moral streak in her as well. And given the ensuing consequences, this proves to be a tragically noble character trait.

This is a film where moral values are implicitly questioned.  In some ways, Bannion is an existential hero, not least in his desire to live his life authentically.  Life is mostly a struggle and with little meaning unless you are true to your personal moral code.

Many people die around Bannion as a consequence of his moral crusade, some of them innocent.  He maintains his moral integrity, pursuing corruption nomatter what, but the costs are huge.  Lucy Chapman, Duncan’s mistress, is tortured and killed, because she was seen being questioned by Bannion.  Katie Bannion, his wife, dies in a car bomb meant for him, leaving a motherless child.  Debby has her face scalded and disfigured as ‘punishment’ for talking to Bannion, and then is shot. Gordon, one of Lagana’s hitmen, is forced to confess, and then Bannion deliberately leaves him to be killed by his associates, leaving Bannion’s hands clean.  Many deaths, most of them women, killed as an indirect consequence of Bannion’s actions, but all the time Bannion remains untainted. On the surface he appears to hold the moral high ground, by pursuing the criminals and their corrupt network, but that ground is shaky.  Is the noble pursuit worth the destructive consequences?

The most jaw-dropping moment of cruelty, and the film’s most famous scene, is when Stone discovers that his girlfriend Debby has been talking Bannion.  In a violent rage, he hurls a jug of boiling coffee into her face, scalding and permanently scarring the entire left side of her face.  This shocking scene is masterfully filmed.  We have already seen examples of Stone’s cruelty and anger, so we are tense, but we don’t expect this.

With Stone in a snarling rage, the camera very briefly rests on the coffee jug, it’s contents visibly boiling.  We see it for just for long enough for us to take it in, but not long enough to anticipate what’s going to happen.  Then he grabs the jug and throws the scalding liquid at her, hitting her face offscreen so all we hear is the blood-curdling scream, and see the appalled reaction of his fellow criminals who try to restrain him.  When we next see her she has a bandage over half of her face, a mask and reminder of the violence against her.  It is this moment that convinces her to turn against Stone and seek her revenge.

Interestingly, when she gets her revenge the way it’s filmed mirrors that earlier scene.  Stone arrives at the apartment; she is waiting in the darkness, but he doesn’t know.  The camera stays on Stone, looking harried and tense.  All of a sudden, from off-screen, Debby hurls her own coffee jug at Stone’s face.  We see it hit, and his screaming agony, all the while Debby remains out of sight.

Lee Marvin’s character is brutally sadistic and cruelly violent.  He’s quick to anger, is  emotionally charged and unpredictable.  It’s a great performance, and quite frightening.  Situations in the film escalate quickly and much of the violence in the film is abrupt and unexpected; this makes it all the more shocking.

The camerawork is deceptively simple, but on reflection it’s very carefully planned.  The characters are precisely positioned within the frame, and the camera always moves with purpose, to reveal or to hide.  As this is often described as a film noir, I was expecting a lot of expressionistic framing, with interesting camera angles and shadows, but we don’t get this.  This is surprising, particularly as director Fritz Lang comes from a background of German Expressionism, the inspiration behind the camerawork in many film noirs.  But then again, this film doesn’t really fit into the film noir formula either.

In fact, this film is very different from Fritz Lang’s German films (that include the iconic science fiction epic Metropolis, the Mabuse gangster films and the stunning child-killer drama M).  In these, the characters deliberately are really no more that ciphers or archetypes, whilst in The Big Heat the characters have psychological complexity.  Also, in the German films the sets are huge and designed to be impressive, they are almost characters themselves and meant to be clearly artificial.  In The Big Heat the sets are realistic.

The script and direction is crystal clear; despite the complex plot you always know exactly what’s going on.  It’s stripped of unnecessary detail.  In the blu-ray extras, Tony Rayns’s analysis describes an example: when the car bomb explodes, we see Bannion desperately trying to break the glass to open the door and then dragging his wife’s limp body from the vehicle.  We immediately cut to a meeting in the Commissioner’s office, clearly some time later, when we learn that Katie died, that the funeral has passed and that Bannion is starting work again.  We aren’t shown Bannion frantically trying to ressucitate his wife, or his grief at the funeral.  It’s not necessary.  We’re told what we need to know and our imagination fills in the gaps.

Bannion loves his wife deeply, she’s mother of his child, she represents fulfilment and happiness, and moral integrity.  She’s contrasted with Debby, a free spirit with looser morals.  After his wife’s death, Bannion encounters Debby and she follows him in the street.  He’s caught her eye and she’s surprisingly forward: Bannion asks: “What are you having?”.  She responds: “I don’t know. You, I think”.  She goes back to his hotel, but something she does reminds him of Katie and he pulls away.  She would never be a replacement.  When Debby asks him to describe his wife, he describes her physically, not what she means to him, a ‘policeman’s description’.  But at the end, on her deathbed, Bannion tells Debby what Katie really means to him, how important she is.

Powerhouse Indicator’s new blu-ray restoration is exceptional.  It looks like it could have been filmed today in crisp and rich black-and-white, and this makes the film’s impact all the more immediate.  It comes with a good selection of extras, including a booklet that describes the challenges the film had getting past the censorship codes of the time; amazingly the film was released uncut despite it’s violence and moral ambiguity.

Jeanette Nolan, who played the deceitful widow Bertha Duncan, had her film debut in Orson Welles’s 1948 film of Macbeth and she later was the uncredited voice of Norman Bates’s mother in Psycho.  The Big Heat was one of Lee Marvin’s early roles; he would gradually rise to prominance in the sixties with such films as The Killers and Point Blank.  Gloria Grahame, whose role was originally intended for Marilyn Monroe, was nearing the end of her golden years, after starring in It’s A Wonderful Life and The Bad and the Beautiful.  Jocelyn Brando, who played Bannion’s wife Katie, was Marlon Brando’s elder sister.  The Big Heat was her biggest role; she was blacklisted in Hollywood after signing a peace petition.  Alexander Scourby, who played crime boss Mike Lagana, went on to make 422 audiobook recordings, including the entire Bible in two different translations.