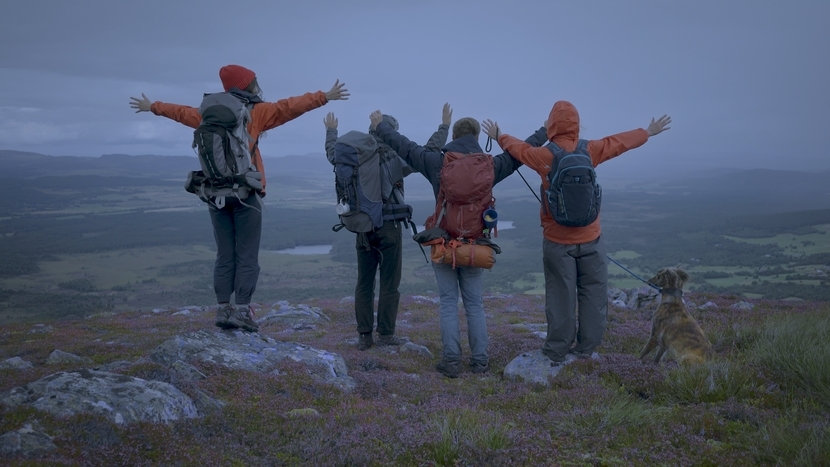 Evelyn is a a beautiful documentary about director Orlando von Einsiedel’s family confronting their grief by revisiting his brother’s favourite landscapes. ⁦It’s moving and honest, a very personal yet accessible film about the effects of suicide and about emotional acceptance and family bonds.

When Einsiedel was younger, his brother Evelyn killed himself aged 22, two years after being diagnosed with schizophrenia and suffering chronic depression. His death had a devastating effect on the family. His parents, already estranged, had individually found a way to face the tragedy, but the three remaining siblings, including Einsiedel himself, never could. Their inability to talk about it had driven them apart over the thirteen intervening years.

The documentary follows the family on a series of walks in the British countryside, places that Evelyn loved, places with memories. They would use this time as an opportunity to talk about their feelings, to understand one another’s grief, and – perhaps – to find some sort of acceptance. A sort of talking-walking therapy, albeit one accompanied at every step by a small film crew.

For a director accustomed to filming in extreme situations – Syrian war zones, the Congolese jungles – Einsiedel clearly found it incredibly difficult to turn the camera on himself and was initially very unwilling to confront his grief. At the Q&A producer Joanna Natasegara, a frequent collaborator of Einsiedel’s, said that after filming horrendous situations in White Helmet each member of the crew would go home and cry. Orlando never did, as though he had some sort of block deep within him. When Natasegara first proposed to Einsiedel about making a film about himself and his family, his immediate reaction was anger at the suggested intrusion. But when he contemplated his impulsive reaction he realised that there was something of value in her suggestion. Eventually he decided to go with it and – incredibly – he convinced his family as well.

It helped that he was very close to the film crew – he had worked with them all before, sometimes in very difficult locations – and his family had got to know them as well. So there was trust. The family and crew also agreed some rules: everything would be filmed, none of the family had the right to say ‘cut’, but anyone could veto the use of any footage.

Nevertheless, Einsiedel said, he almost halted filming after just a couple of days filming in the Cairngorm mountains; it wasn’t working and he found it excruciating to be in front of the camera – to be present. Also, he couldn’t stop himself from doing what he always did: thinking about the filming process, how it would look, what moments could be used in the edit, etc. After the second day, Natasegara insisted he had to fully commit to being one of the subjects. Letting go of the minutiae of the production wasn’t a technical problem – Einsiedel and the crew had prepared for him to be less involved – but it proved to be an emotional mountain.

Einsiedel had buried away his grief for thirteen years – at the start of the film he admitted that he struggled to even say his brother’s name. He was able to deflect attention in the first couple of walks by taking a more supporting role, as his mother and then his father and new partner took centre stage. Both his parents were perhaps better equipped to discuss their grief. This, and the sparking resentments and friction between sister Gwennie and her father, offered plenty of interest for the camera, allowing Einsiedel to have a smaller part.

It’s only on the third walk, in the Trossachs, that we see Einsiedel more challenged. The three siblings walk together with two close friends, both parents absent. One of these friends recognised that Einsiedel was hiding, that he was asking questions of his family as a way to avoid answering questions himself. This conversation becomes an emotional pivot for the documentary.

That we’re able to eavesdrop into such deeply personal and painful conversations is thanks partly to the film crew’s meticulous technical planning. There were two cameramen who walked in front, with the cameras pointing back to the subjects. These cameras were built into modified backpacks and although this meant the operators had to rely on autofocus and had little control over framing, it had the benefit of making the cameras unobtrusive – it’s not quite steadicam, not quite hand-held, but neither is it distracting for the viewer or subject.

Each of the family and friends wore discrete microphones, and the film crew could hear a blend of all the individual voices. Even if the group separated, the crew could identify and respond to interesting conversations immediately by monitoring the live sound. The final cut takes advantage of that; there are times when the camera and sound focuses on a particular conversation, and another distant conversation is blended in. It didn’t take long, apparently, for the family to forget that the cameras and microphones were there.

Despite this basic, albeit inventive set-up, the simple camerawork supplemented by drone footage is frequently beautiful. It captures the beauty of the British countryside.

Despite its difficult subject matter, this is a film about reconciliation and optimism. There are plenty of encounters with passersby who have experienced similar difficulties with mental health and grief. The sense of shared support is strong, between family and friends and also from strangers. The topics explored in this documentary are not unique to one family, they are likely to be relevant to many viewers. The filmmakers intend it to raise awareness of the support that’s available for those affected by mental health and suicide.

This is an honest and fascinating documentary, and its wider relevance helps it avoid mere voyeurism. It’s not afraid to acknowledge that the family may never fully come to terms with Evelyn’s death – they will never stop grieving – but they learn to face up to it and repair their shattered bonds. And in this way, it is ultimately a film about recovery and acceptance.