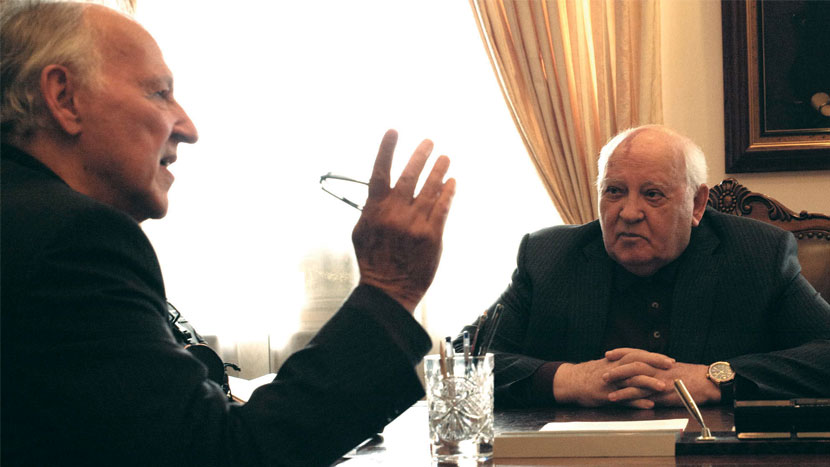 In the West, of course, he is admired as the Russian premiere who was pivotal in ending the Cold War, improving human rights in Russia and overseeing events that led to the reunification of Germany and the fall of the Berlin Wall. He was the architect of momentous change without violence and was awarded several honours including the Nobel Peace Prize. However, in today’s Russia he is seen as a failure or even as a traitor, responsible for the disintegration of the Soviet Union and damaging Russian national identity.

Meeting Gorbachev is a fascinating documentary co-directed by Werner Herzog and André Singer centred around a set of three one-to-one fireside chats conducted over six months. Gorbachev is ailing and perhaps close to death and so each interview was limited to only 100 minutes. With language interpreters relegated to the room next door (the two men hear translations through discrete earpieces) the conversations are set up to be informal and intimate.

From the very start Gorbachev is charismatic and engaging. We first see him introduced to the film crew as they are setting up. He is good humoured, personable and accommodating despite his obviously frailty. This is the charm that won over Thatcher, Reagan and Kohl. Gorbachev clearly agreed to the interviews to define his legacy and the documentary is admittedly a touch hagiographic, but nevertheless it’s a remarkable overview and manages to draw out some affectingly personal reminiscences. This is a rare opportunity to hear his words first-hand.

The film is structured as a chronological biography, the interviews interspersed with choice archive footage accompanied by Herzog’s softly spoken narration and also with new talking-head reminiscences from other key players of the time. It’s an absorbing overview of a remarkable life.

Born in 1931 to peasant farmers in the north Caucasus in south-west Russia under Stalin’s rule, he was intelligent and hard-working as a boy. He was even awarded a state medal with his father for their prodigious combine harvester yield! He moved to Moscow to study law where incidentally he met and married Raisa, but rather than pursue that career he developed a keen interest in politics. He rose up the ranks and eventually joined the Politburo in 1979, three years before Brezhnev’s death. In 1985 he was elected General Secretary, in effect the leader of the Soviet Union.

It’s remarkable to reflect that Gorbachev was leader for less than seven years and yet that short period encompassed Chernobyl, ‘perestroika’ reforms, opening dialogue with the West most notably the famous summit in Reykjavik with Ronald Reagan, significant improvements in the Soviet Union’s productivity and work ethic, ‘glasnost’ or greater transparency in domestic politics and significant steps towards global nuclear disarmament. Not to mention the end of the Cold War. All in seven years.

For all Gorbachev’s achievements, it still seemed something of a surprise that Herzog chose to profile a politician. Herzog is usually fascinated by the crazed visionaries and poetic outsiders, not a statesman who works within the system and whose legacy was peaceful change. The documentary itself is also unusually straightforward for a Herzog film.

It turns out that the project was instigated by co-director André Singer and producer Svetlana Palmer. Singer worked as Herzog’s producer for more than twenty years, on films including Little Dieter Needs to Fly, The Wild Blue Yonder, the death row documentaries Into the Abyss and On Death Row and the Netflix volcano documentary Into The Inferno. He also produced Joshua Oppenheimer’s incredible The Act of Killing and directed Night Will Fall, the powerful documentary about the German Concentration Camp Factual Survey that was restored a couple of years ago.

Both Singer and Palmer were at the preview screening that I attended. They said that Herzog joined the project to be the interviewer and also, it was implied, because his attachment would help raise funding for the film. I had the sense that Herzog gradually assumed more control, everything had to be done his way, and that this caused some frustration.

Any such friction isn’t apparent in the final film, which benefits from Herzog’s unique perspective. His droll narration and editing draws gentle humour from the absurd. A succession of solemn state funerals of Gorbachev’s ailing and elderly predecessors Brezhnev, Andropov and Chernenko, mere months apart, are edited to become ridiculous in their repetitiveness. And the discovery that, on the day the Berlin Wall fell, the top story on Soviet state news was a story about using beer to kill garden slugs; Herzog lingers on the news broadcast footage long enough to reinforce its inanity.

[There’s also a short clip from Herzog’s astounding Lessons In Darkness documentary about extinguishing the Kuwait oil field fires, which made me long to see the entire film on the big screen someday]

Herzog’s disarming interview style is also used to great effect. Both men are affable yet stubborn, gently testing each other, and they seem to genuinely enjoy each other’s company. Herzog as usual asks questions that gently jolt unexpected emotional responses – who else would have the audacity to ask the ex-Soviet leader if he can still smell his dead wife?!

The effect is to humanise Gorbachev. It seems he most wants to be remembered for reducing nuclear weapons. But the interviews are most affecting when Gorbachev talks about personal matters, including a remarkable and tender sequence when he reflects on his love for his wife Raisa.

Gorbachev is a tragic figure, living alone, his health fading and his achievements unrecognised in Russia. There he is perceived by many as a weak leader even though that’s patently untrue considering what he achieved over his mere seven years as leader. And a weak man could never negotiate such a rise to power. There’s a distinction between strength and being an autocratic ‘strongman’.

Putin is noticeable by his absence, there’s just a few seconds footage of him at Raisa’s funeral. Although Gorbachev expresses his general concern and distaste for today’s populist leaders, he doesn’t name Putin specifically and Herzog doesn’t probe. Singer said this was deliberate. Gorbachev is merely tolerated in today’s Russia, the country he loves, but a direct statement criticising Putin might have had unfair consequences on the frail dying ex-leader.

Perhaps this film will partly repair Gorbachev’s damaged legacy at home. It premiered at the Moscow Film Festival where it was warmly received and will soon be shown on national state television. When asked what he would want on his gravestone, Gorbachev replied: ‘we tried’. Gorbachev more than just tried, and Meeting Gorbachev serves as a fitting and fascinating reminder of all that he achieved.

Meeting Gorbachev was released to cinemas in the UK on 8th November 2019 and can also be streamed on the bfiPlayer and Curzon Home Cinema.