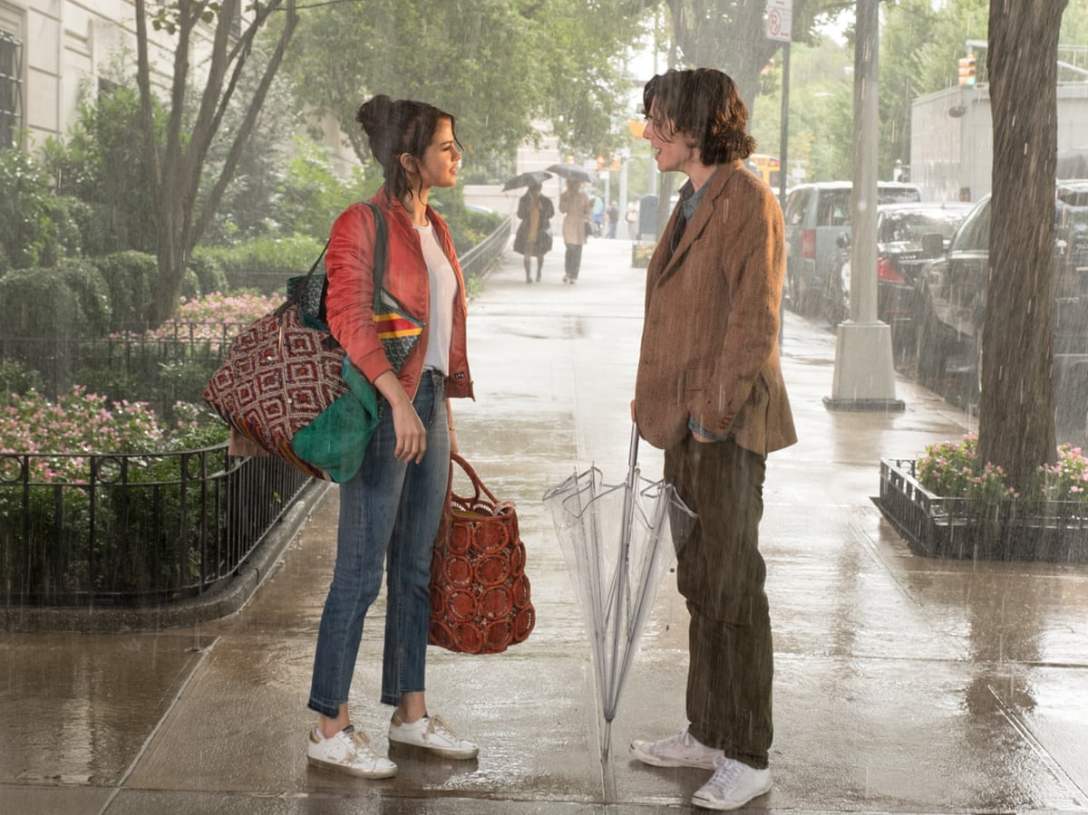 It would be easy to quip that Woody Allen’s 48th movie as director is a washout, a damp rehash of over familiar obsessions. That’s unfair, although this breezy and lightweight film is lifted by some very good performances from its actors, a charming soundtrack and typically beautiful camerawork by Vittorio Storaro, while Allen himself seems mostly to be treading water.

To say the last few years have been stormy for Allen would be an understatement, and the director now comes with such baggage it’s difficult to know even how to write about his latest film. The 1992 child abuse allegations were resurrected and deeply scrutinised at the height of the #MeToo movement in 2017 when this film was shooting. By the time it was complete several of its actors including Timothée Chalamet, Selena Gomez, Rebecca Hall and Griffin Newman declared their regret for being in the film and donated their salaries to charity, although in fairness other actors including Jude Law defended him. Amazon, its funder, shelved it as unmarketable and also cancelled a four-movie deal. Allen sued for $68 million and Amazon eventually settled; the delay meant that 2018 was the first year since 1981 that there was no Woody Allen film released.

When A Rainy Day in New York got its belated cinema release in July 2019, it premiered in Poland of all places. Things seemed to look up in early May when it was announced that Rainy Day topped global cinema box office takings, a surprising achievement. However it turned out this was solely from ticket sales in South Korea, which at the time was just about the only country in the world where cinemas hadn’t been closed down due to Covid19 and the film was virtually the only new release. It will probably never get a release in America.

Artistically, Woody Allen fans have become used to mild disappointments, especially when compared to his staggeringly exceptional run of films from the late seventies to the late nineties. Since then, there have been some successes: Match Point (2005) was a big hit although I personally disliked it, Vicky Cristina Barcelona (2007, also with Rebecca Hall), the wistfully romantic Midnight In Paris (2011) and Blue Jasmin (2013) not least thanks to a stunning performance from Cate Blanchett. Even the minor movies inbetween have just about satisfied his fans though they were often weaker echoes of past glories. However, things took a creative nosedive around five years ago with the atrocious Magic in the Moonlight and his mini-series for Amazon Crisis in Six Scenes was an unwatchable embarrassment. Admittedly things picked up a little with Irrational Man (2015) and Cafe Society (2016).

All things considered, not the most auspicious background for A Rainy Day in New York. However, the film is merely unremarkable. It’s not terrible (although it is bad in places), but it doesn’t light up the screen either.

The story is superficial, even for late Woody Allen. Chalamet plays Gatsby Welles, a young man attending a semi-prestigious liberal arts college, aimless in a mild state of rebellion from his socially conservative and wealthy New Yorker parents. His girlfriend Ashleigh (Elle Fanning) is a journalism student from Arizona and also comes from a wealthy background.

Ashleigh gets a rare opportunity to interview a prestigious film director so the couple travel to New York and decide to make a romantic weekend of it. The pair get separated as Asheigh gets distracted by a succession of entanglements, meanwhile Gatsby catches up with school friends particularly the younger sister of an ex-girlfriend played by Selena Gomez.

Of course this is a retread: the young male character has to choose between the reliable, familiar but superficial girlfriend and another woman with appealing native intellect and carnal allure.

Nobody familiar with Allen’s films would expect realism and although this is purportedly set in present day these characters could be refugees from times past. They make jokes about Grace Kelly and Gone With The Wind, they quote Cole Porter and sing Chet Baker’s “Everything Happens to Me”. The dialogue harks from the last century and can be cluttered (Gatsby refers to his mum’s party as “a farrago of WASP plutocrats”). Gatsby even wears tweed. Whether the viewer can accept these anachronisms very much depends on how willing they are to accept this fantasy world. It didn’t bother me personally, but I’m sure many will find it jarring.

Since the mid-nineties when Allen seems to have realised that he could no longer plausibly cast himself as the romantic lead, many of his films’ protagonists have effectively been Allen surrogates, to varying levels of success. Kenneth Brannagh’s performance felt too much like an impersonation and Colin Firth was excrutiating, but Chalamet does a good job bringing enough of himself to the character to make it more than a mere shadow, and he’s well cast as the mildly bohemian, winsome, sensitive but aimless Gatsby.

Thanks to cinematographer Vittorio Storaro, the film looks stunning. Storaro of course is best known for his work on Apocalypse Now and several Bertolucci films including The Conformist. He shot the previous two Allen films and is currently filming his next, Rifkin’s Festival. Unlike, say, Manhattan, this film doesn’t showcase the city in all its grandeur despite a minor setpiece at the Metropolitan Museum of Art. Instead it feels small and unhurried as if everything’s contained in within a few pleasant streets.

Storaro’s work is so consistently beautiful it’s easy to take him for granted, but he really is a master of lighting and tone. Here he bathes everything in warm golden hues that enhance the film’s nostalgic fantasy tone, particularly in Gatsby’s sequences. The hotel lobbies and grand Manhattan townhouses seem to be from an earlier, more elegant time, and he takes full advantage of the near-constant silver rainfall to give the film a romantic sparkle.

However, the blocking and framing often feel under-rehearsed. When the camera is mobile, it seems at times to be straining to find its mark, reacting to the actors rather than anticipating them. It’s not a major problem, but it’s distracting at times.

More crucially, it seems that more than just the shooting was rushed. The script really needed a few more drafts before filming. Although I didn’t find the archaic dialogue a problem, many of the mild jokes barely raised a smile.

There are more fundamental problems with the structure and story, however. Superficially there’s an arc and a closure, but it felt disjointed, there was a strong disconnect between the couple’s individual narratives and it was unclear what the film was ultimately trying to say.

Ashleigh’s story felt the most underwritten and insubstantial. She encounters three men (Liev Schreiber, Jude Law and Diego Luna) who in turn seek solace from her: spiritually, emotionally and then physically. This seems to enliven Ashleigh, at least for a while – is this intended to provide contrast with her less exciting relationship with Gatsby? It’s not really clear in this awkward farce.

It doesn’t help that all three are powerful, predatory older men and that Ashleigh is shallow, giggly and appears to lack any agency as she allows herself to become flattered and excitedly besotted. It’s regressive, and not just by today’s standards. The script even contrives for her to strip to her underwear, just to set up an (admittedly amusing) punchline. Generously, this could be Allen’s attempt to make some sort of commentary on male power in the movie industry, but if that’s the intention the insubstantial script fails badly.

What’s more, although this thread is played for laughs the humour is mostly at Ashleigh’s expense. The dialogue constantly mocks her, making her little more than a gullible unsophisticated caricature. It’s simply too broad; there’s no way such a young woman could be so painfully naive. Her whole character becomes implausible as a consequence. It’s the same underlying condescension that slightly marred Mira Sorvino’s character in Mighty Aphrodite (1995), but it’s more obvious here because the character is so underwritten. Nevertheless, as with Sorvino, Fanning’s winning acting almost manages to bring the character to life and she is always watchable and engaging.

The other narrative facet of the film is Gatsby’s story and thankfully this is more interesting and successful. With Ashleigh absent for the day, he wanders to familiar places and catches up with old friends and relatives, reflecting on his life and values. He mildly resents his respectable and privileged upbringing, and has sleepwalked into a comfortable listlessness, filling his time with aimless distractions. Even his affectionate relationship with the pleasant but naive Ashleigh doesn’t seem to nourish him deeply. However, a chance meeting with Chan Tyrell (Gomez) stimulates a hunger for something more substantial.

Gomez is great here, playing Chan as enticing yet wittily dismissive, mocking and flirtatious. The sparring dialogue between Gatsby and Chan is enjoyable, and Gomez gives it an extra spark with her wry wisecracks. In these scenes the film takes flight as the two warm to one another. Admittedly, her character is a kind of male fantasy, a confident and very sexy woman who even shares Gatsby’s love for romantic walks in the New York rain (she ticks all the boxes!). But Gomez plays her with self-respect and an assured wit and she is easily the most 3-dimensional character in this film. I last saw Gomez in Harmony Korine’s Spring Breakers, playing against type as a bad girl. Here, her role is less rebellious but she still brings charisma and spirit to the film.

It’s such a shame, then, that after setting up the burgeoning attraction between Chan and Gatsby, the underwritten script doesn’t really allow it to fully develop. I wanted to see more of this, but instead the film abandons Chan in favour of a clumsy redirection where the pseudo-Freudian Madonna and whore literally become one and the same. The two plot threads eventually come together as Gatsby and Ashleigh reunite, but the ending is rushed and untidy, and just a little too implausibly neat.

Like many of Allen’s later films, A Rainy Day in New York is merely an enjoyable distraction, it’s comfortably familiar and its tone is warmly nostalgic. However, the script is underwritten and its themes are poorly incorporated. The Elle Fanning plot thread is a bad misfire while the Chalamet / Gomez portion while charming felt underdeveloped, and the combined effect makes the film structurally imbalanced. Supporting actors Rebecca Hall, Diego Luna and Jude Law (who I last saw in the excellent Vox Lux) are solid but unremarkable. It’s just about saved by its lead actors, particularly Gomez, by its tone and cinematography.

That said, the circumstances surrounding its release and Allen’s current personal reputation may make this film commercially unsavable. Many will choose to boycot the film, even previously stalwart fans. Because so many of Allen’s films are infused with his persona, it’s more difficult to separate the art from the artist, and there are many people who will now find even the idea of watching a Woody Allen movie morally repugnant. I don’t blame them. Whether Woody Allen’s films will ever get a wide release again remains to be seen, nomatter whether he is guilty or innocent of the allegations. But although it’s not his worst, A Rainy Day in New York is far from essential, anyway.

A Rainy Day in New York is released for streaming in the UK on 5th June 2020.