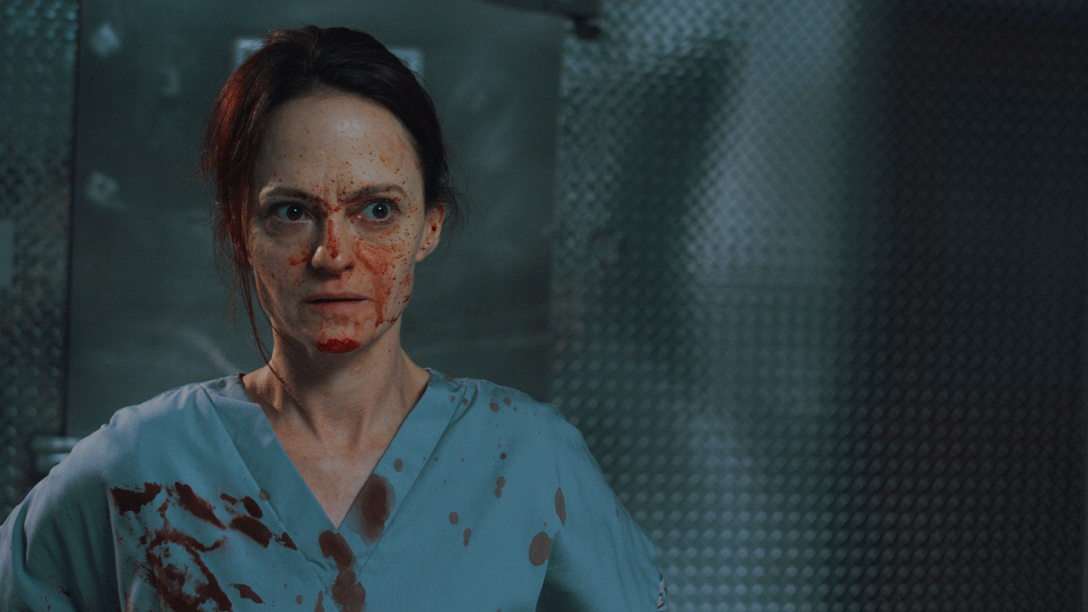 Mandy, played with a withering disdain by Angela Bettis, is cynical, jaded nurse with a lucrative side-line in selling human organs to black-market criminals, harvested from her patients by way a little unofficial ‘assisted dying’. Exhausted and terminally grumpy, Mandy also uses the hospital ward’s store cupboard to fuel her drug addiction.

Mandy’s connection to the criminal underworld is via Regina (Chloe Farnworth), her cousin by marriage a petulant dumb blonde who drives a shock-pink sports car and is breathtakingly stupid. Regina has just two hours to obtain a kidney after messing up a transaction, and so she blackmails Mandy to find her one by whatever means necessary. Cue a very black comedy as the two women attempt various ways of extracting the precious organ from potential living donors: Mandy using her guile and resourcefulness and impatient Regina by far more drastic and comically incompetent methods.

Set over a single titular night shift, the film is almost entirely shot in Mandy’s hospital ward with an entertaining array of characters including senior staff-nurse Karen (Nikea Gamby-Turner) who is in cahoots with Mandy’s sinister side-line, Mrs Patrick (Missy Stahr Threadgill) an elderly patient who is perhaps less senile than she first appears, and Officer Myers (Kit Williamson) a talkative, well-meaning but woefully incompetent cop. All the good cops are attending a Y2K bug convention, an odd but largely irrelevant reference to the film’s 1998 setting.

There’s a more immediate threat from both David Arquette (who also co-produced) as a cop-killer destined for the electric chair who seems bemused by the violence that surrounds him and the organ-trafficking criminals in pursuit including a heavy played by Dusty Williams.

The film inventively exploits and plays with these stereotypes rather than relying on them as lazy writing shortcuts and all the characters are fresh and interesting. The dialogue is razor-sharp, sketching the characters effectively and economically; the jaded wit is nicely balanced against the farcical plot. Of course the situation escalates wildly as the death count gets higher and Mandy battles to avoid detection, but the narrative is never predictable and the film maintains a very watchable energy throughout.

Director Brea Grant, who also wrote the screenplay, maintains the darkly comic tone wonderfully. There’s a blend of realism and absurdity – you could really believe in these exhausted and sardonic nurses, and yet some of the other characters and situations are comic-book ludicrous. But it all feels happily consistent – an impressive balancing act. There are even occasional, fanciful excursions including a song and later even a dance scene, but they are very welcome digressions never whimsical or mannered.

Angela Bettis’s central performance as Mandy is brilliant, played with a world-weary disregard devoid of empathy or bed-side manner. Her line-deliveries, her physical shrugs and facial expressions are pitch-black perfect and much of the humour is seen through her jaded eyes; she’s a fun anti-hero. Interestingly Brea Grant originally considered playing the role herself, but I’m not sure she could have delivered such delicious disdain as Bettis gives us.

The film is also enhanced by a musical score by Matt Glass that very well matched to the movie’s tone. An entertaining blend of crisp drumkit, funky cello and faux-operatic voices, it’s quirky, tongue-in-cheek and fun. It sits perfectly with the film, but would also be interesting listening in its own right.

12 Hour Shift had its UK premiere at Arrow FrightFest on 28th August 2020. Although it’s bloody and darkly comic tone might not invite mainstream appeal, I expect those with a twisted sense of humour will enjoy it immensely.

Follow @davefilmblog
Processing…
Success! You're on the list.
Whoops! There was an error and we couldn't process your subscription. Please reload the page and try again.