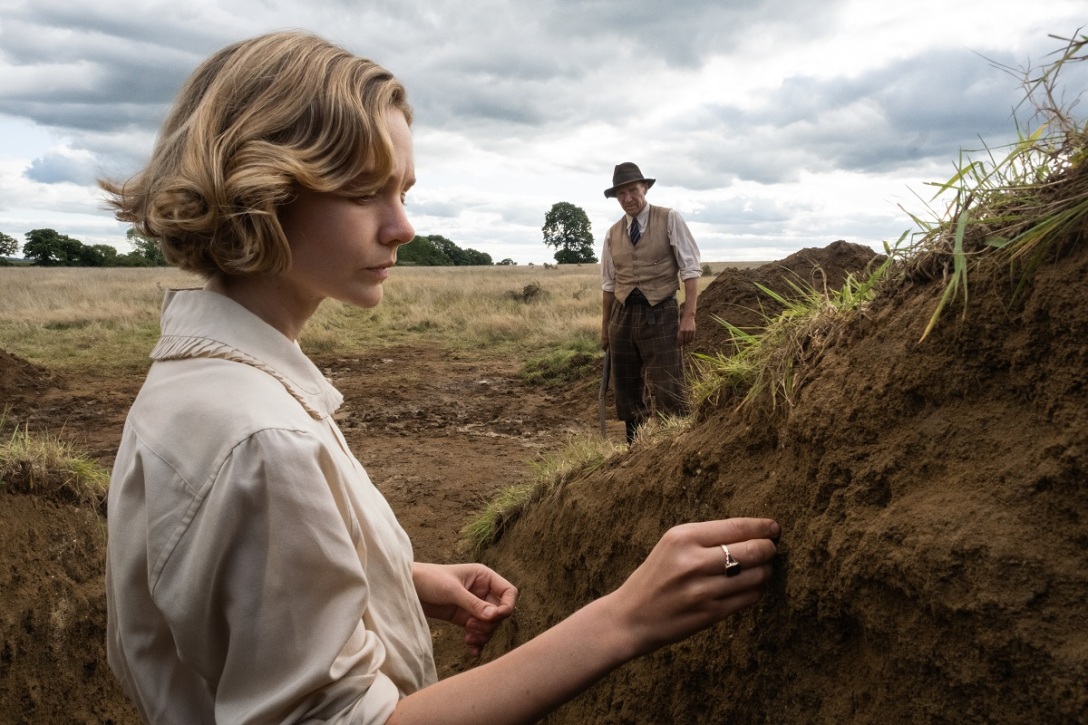 I must say I wasn’t expecting too much from The Dig. It promised all the hallmarks of a bland costume drama: a tale of British exceptionalism (in this case, the discovery of the Sutton Hoo archaeological site, the titular ‘dig’) set in the shadow of World War 2 (a recent national obsession for some) with a heritage cast. The kind of feel-good production we’ve seen countless times before. But it had a good cast – Carey Mulligan, Ralph Fiennes – and the subject matter is interesting so it seemed worth a look.

What we got was a subtle, thoughtful and measured film, one that is not afraid to take its time and featuring some surprisingly poetic direction.

Mulligan plays Edith Pretty, a wealthy widow who lives with her young son on the Sutton Hoo estate in Suffolk in 1939. She is intrigued by grassy mounds on her land and, as the daughter of an archaeologist, understood they should be investigated. She employs Basil Brown (Fiennes), a self-taught and experienced ‘excavator’, for the task with the help of her cousin Rory Lomax (Johnny Flynn). News spreads after Brown uncovers an Anglo-Saxon burial ship and realises its significance and soon professional archaeologist Charles Phillips (Ken Stott) elbows in with his team including Peggy Piggot (Lily James) and her husband Stuart (Ben Chaplin). The film tells the story of the dig and of the characters involved, as the threat of world war looms.

The film is based on a novel (by John Preston) and you can tell; the multiple character threads, story arc and leisurely pace seem more novelistic than most film scripts, but in this case that’s no bad thing. It reminded me of books like Ian McEwan’s ‘Atonement’ or Graham Swift’s ‘Waterland’, tales concerned with place and time, mildly nostalgic but with a sense of change and lasting legacy.

But despite the novelistic structure, this is a very cinematic piece. The camerawork is beautiful, capturing the golden hue of the long grass, the big skies and wide horizons of the flat Suffolk countryside, along with at times the mud and rain. Filmed with evocative framing by cinematographer Mike Eley, it quickly establishes and maintains a sense of place – I was immediately transported. Although this is a very British setting, it reminded me of Terrence Malick’s Days of Heaven in the wide bucolic vistas in which a community work the soil by hand; like The Dig that film was also frequently shot during the ‘magic hour’ to capture a golden sunlit glow.

Accordingly, the cinematography imparts a very strong sense of location and also evokes a kind of pastoral constancy that’s central to the film’s main themes. For this is a film about death and of the timeless impact we make. Sutton Hoo, of course, was a warrior’s grave that left its mark for far longer than the short life of its occupier.

This theme resonates with the imminent threat of World War 2, ever present but never dominating – glimpses of soldiers preparing for war, the occasional radio bulletin, and the recurring sight of small sorties of Spitfires flying in formation across vast skies. War, and death, seem imminent.

Death is also central to Edith’s story. She grieves for her husband, and her visits to his grave echo her fascination with the archaeological burial site. Edith, too, seems to have limited time, afflicted with an unnamed illness that she increasingly struggles to hide. Just as the archaeologists are working against the clock, knowing that their important excavation will cease if war breaks out, so Edith’s own illness seems to compel in her an urgency to complete the excavation, to see it through.

Carey Mulligan is very good. At 35 years old, she seems a little too young to be playing Edith (her part was originally to have been played by Nicole Kidman who at 53 is the same age Edith was in 1939). But despite her relative youth, Mulligan plays her with a frailty and conviction that’s immediately believable. It’s a subtle performance; she’s mostly confined to the role of spectator as others get their hands dirty. But she’s central to the film, the driving force behind the excavation and, at times, its defender and we are never in doubt of its personal importance for her.

Equally effective is Ralph Fiennes as Basil, the man who first discovered the archaeological find. The film is his story. We (and Edith) greatly respect his quiet knowledge, skill and dedication, and feel the injustice as the academically-qualified professionals try to push him to the periphery. Fiennes plays him softly spoken (he adopts an impressive Suffolk burr), kindly, principled and humble. There’s a depth to the characterisation of both protagonists.

Although the film begins with a simple focus on these two lead roles, it expands as more individuals enter the narrative. The youthful vigour of Edith’s cousin Rory Lomax (the only fictional character in the film) as he pursues his ambition of becoming an RAF pilot. The professional rivalry between the chief archeologist Phillips, and the far more knowledgeable yet academically unqualified Basil. The childish wonder that the attentive Basil evokes in Edith’s son Robert; Robert is captivated by Basil’s telescope used for stargazing (it seems Basil is fascinated by much that is larger than our human timescales). The bleak loneliness of archaeologist Peggy Piggot, married to an increasingly disinterested husband.

At times, it seems the script tries to throw in a character for every viewer demographic, but that variety of characters also makes the film’s poignant themes around death and what we leave behind seem universal.

I should mention the editing in particular. There are several beautifully constructed and very effective sequences that quietly sew together separate fragments, drawing out poetic meaning. In some of these, we hear dialogue separate to the visuals in a way that feels like the true, inner voices of the characters without ever sounding like mere voice over. This is most heightened in an important scene involving Lily James and Johnny Flynn that feels like we’re eavesdropping into their innermost thoughts, but these artful and delicate touches occur throughout the film. These subtle flourishes lend the film a universality and a sense of the inevitable that again reinforce its themes.

This is a balanced film, its measured pace and consistent tone are maintained by Simon Stone’s direction and Moira Buffini’s screenplay. The piano-based soundtrack composed by Stefan Gregory is perhaps a touch too reminiscent of Philip Glass (the opening music is especially derivative) but it contributes well to the film’s mood.

(in the photo above, Peggy and Stuart Piggot are on the right, and Basil Brown stands behind)

It seems that The Dig is on the whole historically accurate, although perhaps much of that credit should also be given to its source novel. Almost all the main characters existed pretty much as portrayed, and the events as depicted are factual. There’s a little time compression – in real life Basil worked for Edith for two years before the burial site was discovered – and in truth the archaeologists held Basil in high regard, but in essence it seems all is true. Today, the Sutton Hoo treasures are housed in the British Museum, where Basil and Edith’s important roles are now recognised. The museum’s website includes a page on Sutton Hoo with much on the backstory and some intriguing photos of the actual dig that show the film has taken great efforts in its accuracy. This page from the National Trust tells even more of the story.

In truth the search for the archaeological treasure is just the narrative hook that underpins this meditation on death and timelessness. The Dig, though it resembles a reassuring heritage film for a rainy Sunday afternoon, has hidden treasures that are well worth uncovering.