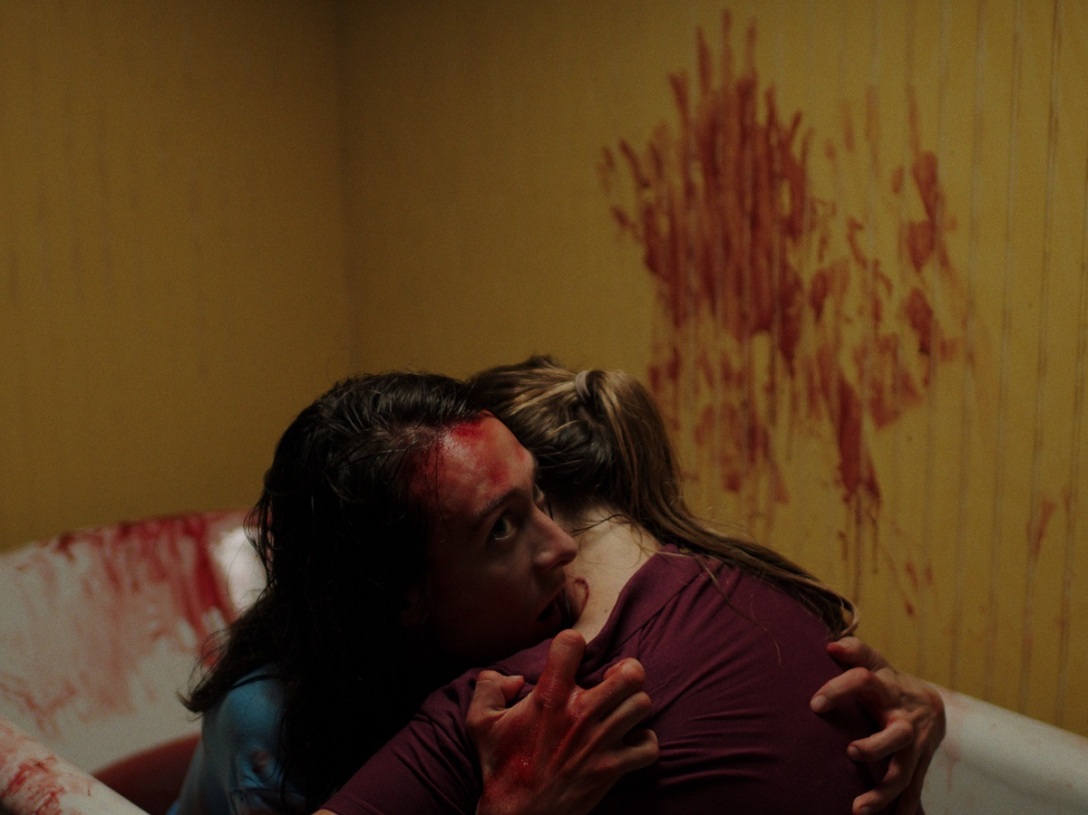 Director Jonathan Cuartas’s first feature is a bleak vampire movie that stands out for its tone and tempo.

Adult siblings Dwight (Patrick Fugit) and Jessie (Ingrid Sophie Schram) care for their sickly younger brother Thomas (Owen Campbell) and live together in their family home. However, Thomas’s unfortunate condition is such that he needs a regular supply fresh human blood to stay alive. Cue his elder brother and sister making frequent nocturnal excursions to knock off the odd tramp or prostitute, anyone who might be an easy target and who wouldn’t be missed.

The problem is while Jessie is stoic in her responsibilities, Dwight is beginning to doubt the ethics of murdering strangers and Thomas is becoming frustrated with his domestic entrapment, yearning to go outside and make new friends. Soon this dysfunctional family unit will be tugged in three directions.

Although there is very little gore, this is a particularly nasty film. Nobody is dispatched quickly, the struggles are messy, prolonged and desperate. Victim’s bodies are drained of their blood in an old metal bucket, like pigs slaughtered to make black pudding. Neither sibling relishes their grim duties, instead they approach it with a matter-of-fact, emotionless resignation. And Thomas’s need for blood isn’t a frantic addiction, it is literally lifeblood without which he would fade and die. He sups the red liquid from a bowl with a wearied necessity.

We spend much of the film in the house, a drab, brown, semi-lit refuge that feels as claustrophobic and confining as a prison. Like the families in Yorgos Lanthimos’s Dogtooth or even in The Texas Chainsaw Massacre, these siblings have their own rituals, rendered strange and distorted by their self-imposed isolation from the wider world. With peculiar musical name-that-tune games and monthly Christmas celebrations, their lives are timeless, distorted echoes of normal existence. This family portrait gives the film an unsettling atmosphere.

With no parents to be seen, the elder siblings adopt parental roles with Thomas. The film captures a believable and nuanced family dynamic, with resentments but also moments of collective, albeit muted happiness. The superbly written dialogue is believably restricted, communication and decision-making does not need much elaboration in this close-knit unit. The trio are enslaved to their gruesome routine and seem all the more wearied for it. This isn’t an existence, more an endless collective purgatory, which makes it all the more difficult for any one of them to try to assert any sort of independence, as the film’s song-lyric title implies.

As you can probably tell, this isn’t your standard vampire movie. There is no glossy glamour or sexy heartthrobs here. In tone it more closely resembles Let The Right One In and Under The Skin in its bleak, measured realism and mood.

The film doesn’t immediately spell out its themes, but I took it as an exploration of a family who had to make sacrifices to care for someone with a chronic illness, with the stress, misgivings and compromises that comes with being trapped in their duties. It also resonates with the isolating restrictions we’ve all encountered to various degrees during the Covid pandemic, but this is coincidental; the film was completed before the virus outbreak.

Each of the characters are superbly written and effectively acted. We empathise even in the darkest moments. Jessie seems to be the least sympathetic; unsmiling, distanced and a cold-bloodied murderer, but she has a frayed strength that holds the family together. Owen Campbell plays the invalid Thomas with a strange mix of innocence and creepiness, we genuinely empathise for his desperate and awkward desire for friendship, and yet are slightly repulsed by his odd, craven neediness; it’s a very impressive physical performance. Perhaps we identify most with Dwight as the moral centre of the trio, but his hesitation and reluctance is often cowardice rather than a strong ethical stance.

The claustrophobic situations and production design is accompanied by a very effective score by Andrew Rease Shaw, whose eerie drones and textures give the film a burdensome, claustrophobic air. The cinematography is by Cuartas’s brother, Michael, who creates an even mood in dimly lit interiors and occasional outdoor darkness, all shot in a constricted Academy ratio.

This is a dark film – literally and figuratively. A sense of grimly restrained realism lends a sombre tone, as the family is caught between a sense of loyalty to one another and a desire for independence. At the end, when we do eventually emerge into the light, it feels like an immense relief. If you’re in the right frame of mind, I’d strongly recommend this resonant, sombre and impressive film.

My Heart Can’t Beat Unless You Tell It To will be released on digital download from 28th June 2021.