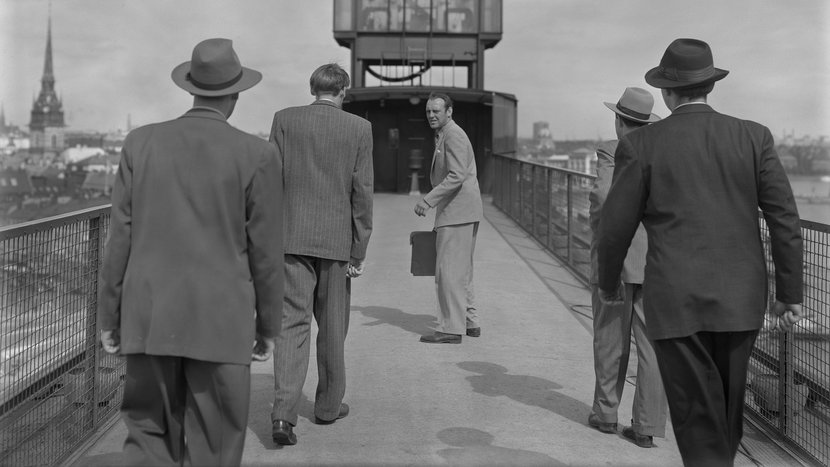 Ingmar Bergman’s lost, long-suppressed movie: High Tension (a.k.a. This Can’t Happen Here) has finally been restored and it showed for one night only at the London Film Festival!

I’d love to say that this is a newly-discovered masterpiece with hidden psychological depths and thematic richness, but sadly it’s not.  On the other hand, it’s nowhere near as terrible as some of the contemporary reviews and Bergman’s own writings suggest.

Instead it’s a fun, lightweight spy thriller, slightly silly with plenty of plot holes and inconsistencies.  It has almost none of Bergman’s usual hallmarks so it’s only going to be of interest to Bergman obsessives, but it’s certainly worth a watch.  It’s a novelty, and the only Bergman film to feature spies and car chases!

It was made in 1950 when Bergman was 32 years old.  He had just made Summer Interlude, one of his best films to date, but he was only just starting to develop his personal style.  High Tension, his twelfth film, was intended to be popular escapism with international appeal to make money for the ailing Svensk Filmindustri studio.  It was based on a popular contemporary spy novel by Norwegian author Peter Valentin. Its Swedish stars, Signe Hasso and  Alf Kjellin, were already developing a presence in Hollywood. Bergman himself was an up-and-coming director.

As it turns out, it was a flop and the critics gave poor reviews.  It wasn’t released internationally (in the UK) until 1953, three years after it was shot.  And it had a small German release in 1959, presumably as a cash-in as by that time Bergman had become internationally renowned with films such as Wild Strawberries and The Seventh Seal.  And then it vanished.

I’ll describe the synopsis in more detail than usual, because the film has been rarely seen.

Set in post-war Stockholm, a community of refugees from the (fictional) country Liquidatzia celebrate a wedding. A young couple is starting a new life, although given their personal histories the minister muses whether the couple, or indeed whether any of the refugees, will ever truly feel settled.

One of the refugee guests at the party is Vera (Signe Hasso), a well dressed woman married to fellow countryman Atkä Natas (Ulf Palme).  Natas is frequently absent, travelling abroad for mysterious work reasons, but he earns good money.  Natas treats Vera cruelly, but she can’t leave as she is financially dependent on him.  Unhappy, Vera has commenced a relationship with Almkvist (Alf Kjellin)

Natas returns home with a package, his flight landing late at night and a car takes him on a long journey to Stockholm.  He is tailed by two mysterious men.  It turns out that Natas is a fascist sympathiser and a spy – this is how he earns his wealth.  He casually tells Vera that he has denounced her parents, in order to demonstrate his loyalty to his paymasters.  As a result her parents have been sent to a concentration camp, albeit a ‘good one’.

Vera, a scientist, kills Natas by puncturing his spinal column with a syringe.  She takes his bag with the package and alerts the police, claiming he died in his sleep.  While unattended, the body is stolen by the two mysterious men, who turn out to be Liquidazia spies.  Natas recovers consciousness – the syringe didn’t kill him – and he is interrogated.  It turns out his bag contained documents including a list of Liquidazia spies in Sweden that would have been valuable to the exiled underground resistance movement.  Crucially, it also contained some documents that Natas intended to use to buy his defection to the USA.

Vera goes to her lover Almkvist’s house.  Almkvist has guessed that Vera was responsible for Natas’s ‘death’, but had presumed it was for noble patriotic reasons.  She confesses to him that she was instead driven by revenge for her parents.  Natas, who has escaped his captors, breaks into Almkvist’s house and holds the two at gunpoint.  He renders them both unconscious and escapes with the documents.

The Liquidazia spies recapture Natas.  Vera is also captured and drugged.  There’s a car chase with the police in hot pursuit.  Then a further chase on foot where Natas flees from the spies, who are in turn pursued by the police.  Natas is chased up a steel structure (the Katarina Lift in the Södermalm district of Stockholm), but when cornered he chooses to  jump to his death rather than be captured by the spies.

Policeman Almkvist, trying to find Vera, recalls a name he earlier heard repeatedly on Natas’s radio – “Nrovnimok Gladyn”.  He realises it’s the name of a Liquidazia boat, currently docked in Stockholm.  The police race to the docks and board the boat to prevent its departure and rescue the unconscious Vera who has been hidden in a lifeboat. She has narrowly escaped a terrible fate in her former home country.  The end.

Later, when Bergman was more famous and powerful, he insisted that the film never shown again.  There were a few reasons for this revisionist request.

It seems even at the time he was embarrassed by this blatant money-making exercise. In his script notes, he wrote that:

“This film is about phantom characters in a phantom world which bears a vague resemblance to the city of Stockholm. I suppose that’s why everyone thinks the story is so great. Because it’s so incredibly inoffensive. I may lose all my integrity on this project, but if so, I pray to God that at least my company will earn a ton of money. So that I can continue with my disorderly balancing act on the outskirts of reality.”

More significantly, during the filming Bergman regretted the film’s focus and tone.  Some of the extras playing Liquidazia refugees were indeed real baltik refugees from the recent war.  He became fascinated by their troubling personal stories and concluded that high jinks of High Tension trivialised their experiences.  If the film were to have any integrity it should be about to their stories, rather than exploit them as background colour.

However, he only realised this four days into production, by which time it was impossible to halt filming or change direction.  Too many people were committed, not least the lead actress Signe Hasso who had ended a successful theatre run to star in the film.  He describes this in his autobiography Images, My Life In Film:

“A creative paralysis hit me after only four days of shooting. That was exactly when I met the exiled Baltic actors who were going to participate. The encounter was a chock. Suddenly I realize which film we ought to be making. Among this exiled actors I discovered such a richness of lives and experiences that the unevenly developed intrigue in This Can’t Happen Here seemed almost obscene. Before the end of the first week, I demanded to see Svensk Filmindustri’s chief executive, Carl Anders Dymling, and pleaded with him to cancel the project. But our train was running its course and could not be stopped. At about this point I had a violent attack of influenza, and from that arose sinus trouble that raged almost comically and tormented me throughout the rest of the filming. My very soul resisted this film, hiding in the deepest darkness of my sinus and nasal passages.”

Even today, it is very difficult to see High Tension.  Svensk Filmindustri continue to respect Bergman’s wishes and it has never been released in cinemas or on home video.  However, the film was carefully restored in 2017, part of a huge restoration effort to mark Bergman’s 2018 centenary celebrations.  It will never be widely released, but they have given permission for a very small number of screenings in this centenary year, one of which was to a small audience of Bergman fans at the London Film Festival.  This is how I got to see it.

As I mentioned earlier, High Tension is by no means a terrible film, it’s just fairly anonymous.  It’s not spectacular, but it’s entertaining and rapidly paced.  The plot is muddled, as my synopsis might suggest, although the film has its virtues.

Cinematographer Gunnar Fischer’s visuals are often impressive including some effective outdoor scenes in Stockholm.  There’s also a good scene when Natas first appears at Vera’s home that looks straight from a film noir.  The venetian blinds cast stark lines of shadows across the room like prison bars, and Natas seems to emerge from the shadows.  Later in the same scene, when Natas tells Vera that he’s betrayed her parents, the direction, acting, cinematography and dialogue combine to surprisingly powerful effect.

Other scenes are less successful.  Many are intended to be light-hearted, but come across as so ridiculous that they break us out of the action. There’s a ludicrous scene when Almkvist and Natos repeatedly snatch a gun from one another; the policeman lets his guard down when he offers to make Natos some coffee!

None of the characters are particularly believable.  The character of Atkä Natas – his name reversed means ‘Satan beware’ in Swedish – is clearly evil.  The supporting cast are truly two-dimensional.

However, the film’s bristling pace and good nature maintains interest and I was prepared to forgive its many flaws.  And it’s always good to see a Bergman film, no matter how minor.

One interesting footnote.  At one point, Natos is accused of collusion with the Nazis and for being personally responsible for the murder of 4,000 Israelis in concentration camps.  As explored in Jane Magnusson’s documentary Bergman: A Year in A Life, Bergman himself naively voiced his support for the Nazis before and during the second world war.  He even initially suspected that the tales of concentration camps and the holocaust was merely anti-Nazi propaganda and couldn’t be true.

This view wasn’t unusual in Sweden at the time, as much of the horrors of the Third Reich weren’t widely known.  However, it was only in 1946 that Bergman realised his naivety and was appalled by the truth.  He vowed never to back any political causes again for the rest of his life.

Perhaps the character of Natos in 1950’s High Tension was in a small way Bergman exploring his guilt.