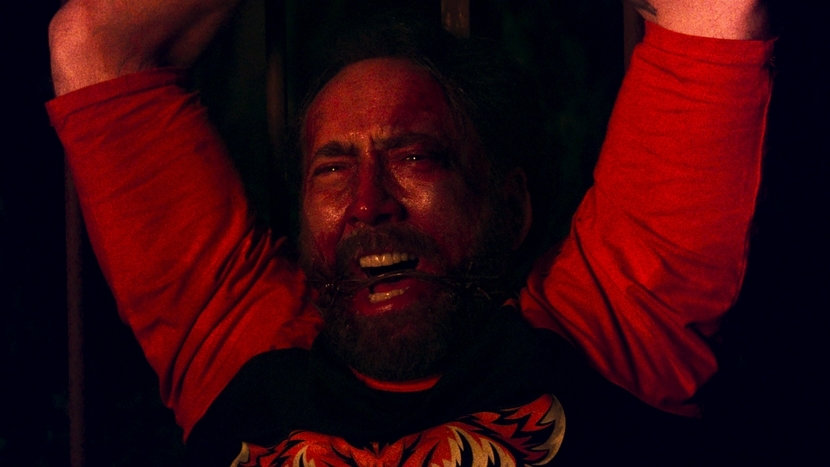 Any film starring Nicolas Cage is going to put a lot of people off.  His over-the-top acting style is certainly unique and he’s been in many bad movies.  Occasionally, however, a film like Mandy comes along when the director has a particular style or vision and you just can’t imagine the character being played by anyone else.

Director Panos Cosmatos, who previously made cult film Beyond the Black Rainbow, has crafted an enjoyable and dark psychedelic revenge movie that oozes atmosphere.

Cage plays Red Miller, a woodsman who lives in a secluded house in the forest with his partner Mandy Bloom (Andrea Riseborough), an artist.  They live a contented idyllic life, although Mandy is slightly unsettled and they are thinking about moving.  One day, when walking alone along forest track, Mandy encounters a minibus containing the members of a murderous cult, led by the sinister Jeremiah Sand (Linus Roache).  Jeremiah decides he wants to sleep with Mandy and his followers capture the couple in their home with the help of some occult practices and some decidedly unusual bikers. Events turn for the worse and Mandy is drugged then killed in front of her partner, Red.  Red then embarks on a mission of revenge.

Mandy‘s mythical structure has an ancient feel.  It moves slowly with a strong sense of inevitability.  There are three distinct acts: a couple live happily in idyllic surroundings; the couple are attacked, their peace is shattered and the woman is killed; the male hero embarks on a quest for revenge.  This familiarity is one of the film’s pleasures.

The initial section is fascinating and beautiful to watch.  It’s necessary for the movie’s structure – we need some light to contrast with the darkness and the scenes in the forest and the cabin are lovely to look at. Although our introduction to the cult is creepy, this initial section is interesting mostly for its visuals.  It’s slow-paced and it doesn’t quite achieve the sense of dread or foreboding that it tries to evoke and feels a little detached.

However, once the action begins I quickly became absorbed.  The second act with the attack on Red and Mandy is the most tense.  You know it’s going to end badly and that Mandy will come off the worst, but you don’t know exactly how.

Once we move into the revenge portion, we can sit back and enjoy the show.   Some of the scenes are ludicrously violent – there’s even a chainsaw fight, prefigured by Cage’s occupation as a woodsman.  But by this stage any connection with the real world has long since vanished and we’re deep in this heavy metal fantasy world.

Nicolas Cage’s acting is remarkably restrained for much of the film and it’s only when we eventually move into the third act that Cage pulls out all the stops.  It’s a very enjoyable performance.  His tour-de-force moment is a remarkable solo scene of him grieving after Mandy’s murder.  Battered and half-dead from the attack, he crawls into his forest home and into the bathroom, wearing only his underpants and a bloodied tiger T-shirt.  Cage’s primal screaming and howling despair at first seem ludicrously overacted, prompting some giggles and cheers from the cinema audience.  However, we’re gradually drawn into his grief and helplessness, and any sense of ridiculousness is swiftly dispelled.

Cage has previously explained his often-derided acting style ‘German expressionist’ or ‘western kabuki’, and in a fascinating recent article as “not natural, but truthful.  Not crazy for crazy’s sake”.  In Mandy, his acting matches the tone and otherness of the story and direction, and it feels entirely appropriate.

After this remarkable pivotal sequence, Red seems to assume a preordained role, his character seems to be possessed by a primal force.  It’s as if his violent trauma and grief have turned him into an elemental archetype.  Red becomes a fantasy hero; he displays superhuman strength and resilience in his quest, overcoming hardships and dispatching his enemies.  He even forges his own sculpted axe.

Mandy is effectively a fantasy incorporating many mythical elements.  The sculpted axe, monsterous evil bikers (read, ‘horsemen’).  The narrative structure with its ethereal forest, the threat from beyond and the descent into hell.

One reading of the film could be that Red was actually killed during the assault, and that everything that follows – his miraculous recovery and the revenge saga – is a figment of his dying imagination.  That would certainly be consistent with the increasingly fantastic tone of the film.

There’s a lot of Christian symbolism in this mythical tale.  The religious cult, dismissed initially as ‘Jesus freaks’, is led by the biblically named Jeremiah who clearly has a fragile messiah complex.  This cult is much darker and more sinister than the cheerful oddness of the cult in The Endless.  There are also crucifixion references, when Red is captured by the cult.  He’s forced to wear a crown of thorn-like barbed wire and he’s stabbed in the side with a spear.  Later, Red is nailed through the wrist to some wood.

The most striking elements of Mandy are its look and feel. The film’s visuals are reminiscent of heavy metal album art and of the luridly drawn covers of the cheap paperback fantasy novels that Mandy reads.  Again this reinforces the mythical theme.  The landscapes are stylised, through bold use of colour, lighting and post processing.  The texture is often hazy – we see incidents through net curtains, forest mists or fog.

This stylisation is applied sparingly at first.  The forest scenes are fairly realistic albeit with slow camera movements and ethereal golden natural light.  However the film’s look intensifies as the story progresses.  Mandy’s drug-addled vision has a deliberate motion blur and transparency, and the bold colours become more intense.  After the attack, everything takes place in darkened rooms or at night, a stark contrast to the earlier idyllic natural day-lit forest.  The primary colours are strange, intense and unreal, mostly reds, echoing the protagonists name.

The soundtrack is equally atmospheric.  The opening credits play to King Crimson’s ‘Starless’, a perfect choice for theme and mood, lyrics: “Sundown dazzling day, gold through my eyes.  But my eyes turned within only see starless and bible black.”.  It’s even more fitting than than the cinematic use of King Crimson’s ‘The Court of the Crimson King’ in Alfonso Cuarón’s magnificent Children of Men.  The soundtrack by Icelandic guitarist Jóhann Jóhannsson is sludgy and droning.

Director Cosmatos is clearly inspired by David Lynch.  There’s a slow-moving eeriness to  the cinematography and sound design that casts a strange hue and menace and that recalls Lynch’s more atmospheric touches.

Cult leader Jeremiah is a sort of pathetic wannabe Frank Booth, Denis Hopper’s wild and frightening villain in Blue Velvet.  He’s a complex and conflicted character, surrounded by sinister fawning companions, he is unpredictable, controlling, and sexually abusive.  But he’s ultimately weaker and more vulnerable than Frank Booth.  Despite his murderous villainy, he has a fragile ego that’s easily bruised.  When humiliated, he yells “don’t look at me!” to his awkward followers, echoing the infamous scene between Hopper and Isabella Rossellini in Lynch’s film.

Andrea Riseborough has a memorable moment in a central scene. Captured and drugged, her character is forced into a room where Jeremiah begins his sexual overtures with the rest of the cult members eagerly watching.  Jeremiah ceremonially strips naked, but rather than panic and scream at the threat of imminent rape Mandy begins to laugh wildly and dismissively.  It’s an incredible scene, reminiscent of the manic laughter of Twin Peaks‘s Laura Palmer’s when also faced with sexual threat.  It emasculates and humiliates Jeremiah, and expresses an unexpected strength of character.

Mandy is a hugely entertaining film with a unique look and tone.  The pre-release hype suggested an intense and violent psychedelic head-trip, but the film is not as extreme as that suggests.  Its dark, fantasy comic book violence isn’t particularly disturbing.  Instead, it succeeds as an atmospheric myth, with a unique style and tone.  Nicolas Cage gives a very good central performance in a role that suits his acting style.

This is always going to have niche appeal, but the stunning visuals and sound design make it one to see on the big screen if you can.  I caught it at the London Film Festival and it’s since had a limited cinema run.  Mandy is a satisfying and unique odyssey.