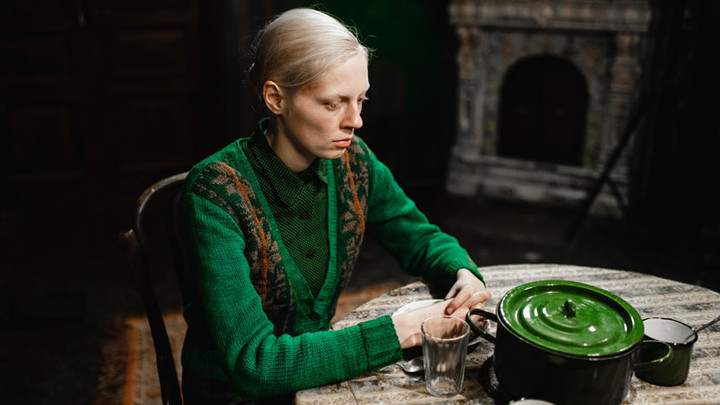 Beanpole is a remarkable film depicting two young women in Leningrad in 1945, the aftermath of the war and after the trauma of the Siege of Leningrad. It explores the co-dependency of the two very different characters, Iya and Masha, both numbed and damaged and struggling to rebuild their lives.

Directed by 28-year-old Kantemir Balagov, a student of Alexander Sokurov, it won the Un Certain Regard Best Film award at Cannes, and Balgov himself won the Best Director Award in the same section. It is Russia’s official entry for the Oscars.

Iya (Viktoria Miroshnichenko), the titular ‘Beanpole’ is a tall and slightly clumsy woman in her twenties working as a nurse in a Leningrad hospital. Her patients are all men, wounded soldiers from the war in recuperation. Iya herself suffers from trauma and is prone to occasional catatonic fits, and indeed she suffers one in the film’s remarkable opening as her nursing colleagues almost ignore her, accustomed to what must be a regular occurence. Iya has a small boy, Pashka (a remarkably naturalistic performance by 3-year-old Timofey Glazkov), who seems to be her sole source of joy and escapism.

Iya served at the front, where she met her friend Masha (Vasilisa Perelygina), another soldier. Masha, more confident than Iya, returns to Leningrad to stay with her friend. The two women are strikingly different in character as well as physically; Iya is tall, blonde and awkward, Masha is short, red-haired and adept. Balagov described them as yin and yang, but they have a close bond, even a dependency, as they both separately struggle with their wartime traumas.

Although this isn’t an easy watch it has a compelling narrative albeit slow-paced. The narrative, which I won’t spoil, explores grief, emotional numbness and manipulation, and love. The two women have both experienced unspeakable horrors – to his credit, Balagov doesn’t show the causes of their trauma, just the effects – but in the aftermath of the war they are tragically unexceptional. Like everyone else, they must quietly rebuild their lives, but it seems they can only do this with cold desperation and a remarkable emotional and physical cruelty.

The film is an original story, but it was inspired by a non-fiction book, “The Unwomanly Face of War” by Novel Prize-winning Svetlana Alexievich. That book, published in Russia in 1985 but written over the preceding 15 years, is a collection of real accounts of women who experienced the Second World War and its aftermath in Russia. It was published in English as recently as 2017.

Beanpole looks exceptional. The production design and cinematography are beautiful and cinematographer Ksenia Sereda was remarkably only 26. The camerawork is mostly hand-held, with long takes moving from room to room, and capturing the emotional nuances of the actors’ performances. Its period setting is strongly evoked by costumes and sets, which are mostly interiors with just a few memoriable exterior scenes that use snowy Leningrad as a backdrop.

It’s filmed with a lush, warm palette of greens and red ocres, clothing and interiors. Balagov said that the rusty reds represented trauma and emotional decay, and the greens represented new life and rebirth – the two main themes of the film. The effect is both cosy and claustrophobic and seems to reinforce the bond between the two women. This colour scheme is only occasionally broken for effect, most strikingly when Masha visits a family in a stately home, all cold blues and whites. In that scene she caustically describes the sexual bargaining that were necessary for protection and survival as a female soldier on the front – a ‘skill’ she carries with her to post-war Leningrad – and this is the only time either of the women’s traumatic past is recollected directly.

There is virtually no soundtrack and I suspect this is a good decision; the emotional impact of music might feel artificial in this film, where the two main characters are outwardly numbed, although it appears there was a very subtle minimalist score. There is no melodrama here, instead the characters’ emotions are repressed, internal, muted, but yet immediate. The only diegetic music that I recall are during two emotionally heightened and traumatic scenes where a radio plays in the background. Apparently at the time the film is set people would use radio as escapism when all seemed bleak.

Balagov was present at my London Film Festival screening and comes across as thoughtful and precise. He had a broad range of cinematic references, and cited Alexei German’s My Friend Ivan Lapshin and Roberto Rossellini’s Roma, Open City as particular cinematic inspirations, the former for Beanpole‘s look and feel and the latter for the post-war emotional tone.

This is very much a story about women. There are significant male supporting characters, kind and good people who are similarly suffering, but many of the aspects explored are particularly feminine, including topics of children and pregnancy, which signifies a desire for figurative rebirth and moving on, and female sexuality and sexual manipulation. This is impressive and bold, coming from a male director, screenwriter and producer, although the performances from both the two female leads are also exceptional, expressing inward trauma in their faces, in their eyes, and in their stilted body language.

It also seems important that the two main characters are both young, we feel that there is some hope and future for them. Remarkably the main crew as well as the two leads all seem to have been in their twenties.

There is also a hint of lesbian attraction, perhaps more in Iya who also is particularly repulsed by (heterosexual) sex, although that could just as easily be a response to past rape trauma, it’s not explained. Both women seemed to show a latent desire for one another. This is bold for a Russian film, and Balagov has stated that he didn’t intend to incorporate LGBT themes. Nevertheless, it seems to add a layer of nuance to the characters and their relationship.

Beanpole has been a moderate success in Russia, where it was released swiftly to capitalise on the publicity of the Cannes wins. The media were generally positive, although there was some criticism from official circles mostly because it inconveniently depicts the after effects of wartime trauma at a time when, politically, war is seen as heroic and self-defining. It’s currently doing the festival circuit internationally and will be released on Mubi.

However, it looks its best on the big screen away from distractions and where the cinematography and production design can look their best. It’s a challenging film, at times very bleak and difficult to watch, but is resonant and ultimately very rewarding. I think it will stay with me for some time.