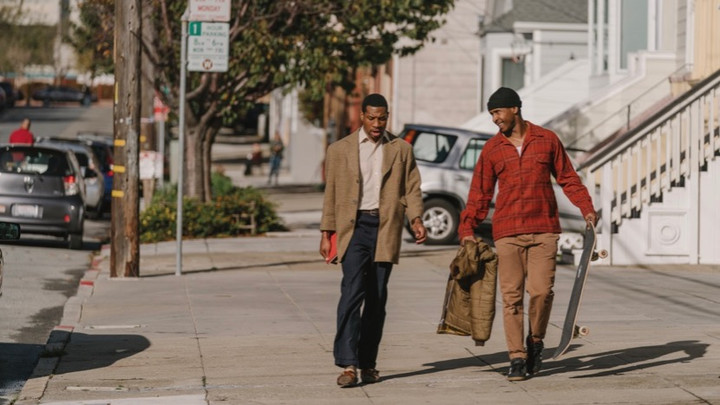 The Last Black Man in San Francisco shouldn’t work. It’s overlong, meandering and unfocused, repetitive and clumsy, made by inexperienced actors and crew. Despite this in the cinema I was charmed and entertained and I left with a lingering sense of the melancholic effect of gentrification and the strength of male friendship.

The film has wowed critics since premiered at Sundance in 2019, where it won awards for Best Directing and a Special Jury Prize for Creative Collaboration. Rightly so, because it’s inventive, takes risks, and feels fresh.

It’s the story of ‘Jimmy Fails’, played by actor Jimmy Fails, a young black man who grew up in San Francisco and has been living at the house of his friend Mont Allen (Jonathan Majors), together with Mont’s father. Jimmy is obsessed with a particular house in the now-gentrified Mission District; a large, decorative Victorian-style building complete with a witch’s-hat tower and a built-in organ inside.

The house had once belonged to Jimmy’s family, but his grandfather lost it. Financially it is now out of reach (the actual house they used for filming is apparently worth around $5M), particularly for a young, black man of little means. Nevertheless, Jimmy makes regular surreptitious trips to the house when the current occupants are out to carry out minor repairs and generally care for it. When an opportunity comes up for the pair to occupy the building they leap at the chance, but Jimmy must come to terms with the reality that their past has gone and can’t be recovered.

The film was written by Fails and by director Joe Talbot. The two men are childhood friends and grew up in San Francisco and the story is inspired by elements in Fails’s life. They wanted to express their sense of loss and melancholy as rapid changes to their beloved city means the locations of their childhood are disappearing fast. The film expresses how gentrification has pushed them away and what that means for their own sense of belonging.

The film is a time capsule; in fact even during the film’s production, locations that they had scouted vanished by the time filming started. The house represents all of that, and Jimmy’s futile attempt to maintain it by stealth is a hopeless cause, but the film is about more than bricks-and-mortar: it’s also the character of the neighbourhood. The kids hanging out in the block, an adult Jimmy who still skateboards almost everywhere despite his remote father’s exasperation, eccentric characters who festoon their ramshackle car with fairy lights, or a nudist waiting at the bus stop. These are the weirdos and bohemians who lent the neighbourhood its flavour, but who are being pushed out by encroaching wealth.

It’s also a film about male friendship. Jimmy and Mont’s relationship is caring and supportive. They can be emotionally fragile with each other, in contrast to the macho bravado that Jimmy’s other friends display on the street corner. Jimmy is distant from his parents – his father is stern and remote, and he’s not even in touch with his mother – and he longs for the sense of belonging that Mont has with his elderly father. There’s touching scenes between Mont and his blind dad (Danny Glover) watching the film noir D.O.A. on TV, Mont describing the action and the pair laughing. Jimmy doesn’t have that close family connection or a physical home and in a sense Mont provides a surrogate. Mont himself is creative, writing plays and constantly sketching in his red notebook, and sees in Jimmy a kindred spirit.

The bond between the two men is central to the film and the two actors clearly have a strong affection and rapport. It echoes the bond between Fails and Talbot, who in real life sought each other as kindred spirits. In the Q&A, Talbot describes how he met Fails as a teenager and found in him someone he could be honest and open with. They two both had creative ambitions and interests, something that wasn’t shared by many of the kids in the neighbourhood. In the film, the warm and likable relationship is central and what holds the film together.

For The Last Black Man in San Francisco is a wayward film. Like many first films it had a long gestation period and it felt that the filmakers kept adding to it during its development. Interesting characters, odd situations, and small quirky moments. There are a lot of ideas, too many perhaps. The film doesn’t really have the nuance to explore them with any depth and the middle section of the film felt overlong. This is both the film’s strength and weakness; on one hand these excursions give the film a fresh, spontaneous feel but they also dilute a narrative that is already fairly thin. That said, in themselves these elements are mostly successful and they are what makes the film stand out.

The cinematography in particular is impressive, together with the crisp editing. The meandering sequences are almost always visually interesting, due to framing, set-up or composition. For example, there’s an early scene where the two are skateboarding across town and the camera picks up interesting backgrounds that capture the variety and essence of the city – and this mostly isn’t the San Francisco of the Golden Gate Bridge, City Lights bookshop or the Transamerica Pyramid building, and other tourist views, this is the San Francisco where people live.

Music is also used with affection. One vignette has the pair meet a busking opera singer, a local character called Tim Blevins who really was an opera singer but now is reduced to performing on street corners. And in a nice cameo, almost-forgotten local singer Michael Marshall appears as another busker performing a poignant version of the sixties classic ‘When You Go To San Francisco’ before a joking snippet of ‘I Got 5 On It’, his most famous song that was recently used memorably in Jordan Peele’s Us. And the recorded soundtrack is a pleasing and inventive mix of styles blending hip hop with Michael Nyman together with a minimalist original score.

All these elements come together to give a warm sense of the character of San Francisco, and its fragility.

This is a love letter to a disappearing city, and a celebration of male friendship. It’s an involving, gentle and amusing film that feels fresh and inventive. Despite a weak narrative its meanders are part of its charm and it’s a pleasure to watch.